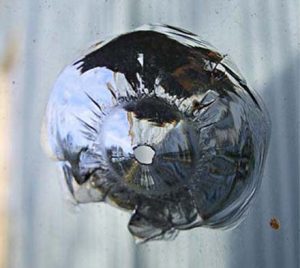 MELVINDALE — The front window of a house in the 17400 block of Hanna Avenue was damaged July 16 by a hard object which struck the glass at a high velocity when the resident was at work.

The victim said he believes the damage was caused by a pellet gun. No pellet could be found in the area, but the damage to the glass supported the likelihood. There were no suspects.