Volunteers at Stout Middle School nurtured the school’s performing arts program with a school-wide talent show Dec. 14 to encourage creativity and provide a safe space for students to express themselves.

Volunteer director and mentor Amen Salha, an Edsel Ford High School senior, said he launched the talent show this year to raise awareness of the importance of the performing arts at the middle school level.

“This talent show provides a safe space for students who aren’t the next NBA basketball players or NFL quarterbacks to express their creative thoughts,” he said. “It offers a community they can rely on in these hard times.”

Salha said his goal is to foster and provide an artistic outlet for students with a creative mindset and inclination.

“It is really important to so many of these students that they have a place where they can practice their passion, and where it is appreciated,” he said. “So, we want to make sure all of these students feel like they are welcome here.”

Salha said the students want to try a non-musical play next.

“I was super happy to hear that, and maybe next semester we will put something on,” he said. “For the past two years, these auditorium curtains have been closed, and it’s upsetting, because a lot of people find comfort being on stage.”

The performance featured student singers, musicians, dancers, the school’s competitive cheer team and a Rubik’s Cube savant, who solved the puzzle in 24 seconds, and a pair of emcees who entertained the house with comedic banter between numbers.

Salha said the performers are a diverse group, as well.

“It’s a great spectrum of students, and I am super proud of that, because I think diversity is very important,” he said. 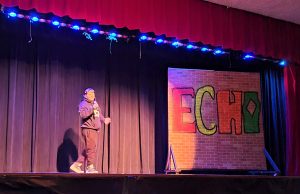 Eighth-grade performer Wyatt Carden, a rapper, who performs his original work, said his father and uncle rap as well.

He said he is nervous until he gets on stage, then it disappears once he is performing, which he said is a very good feeling.

“I am a Catholic rapper, and I don’t cuss in my music,” Carden said. “My music is kind of PG and some of it is really dark, but it’s clean. I feel I get a lot off of my chest when I rap.”

Eighth-grader Jenna Amro, who served as one of the emcees, said she loves volunteering and helping out at her school, so the position was a natural fit.

She said she got to know the performers to be able to suitably introduce them.

“Everybody is so amazing here,” Amro said. “Everybody’s so kind, and they are so understanding, I felt very comfortable coming in.”

She said being on stage over the years has bolstered her confidence.

“Dearborn Public Schools have amazing programs, and they are so open,” Amro said. “I feel like you should just always be open to do things like this.”

Parent volunteer Sumaia El-Assal said it was important to give students an opportunity to do things like perform in a talent show after being isolated for so long because of the pandemic.

“It lets them express and bring the art back here,” she said. “We have a variety of kids from all backgrounds, so we are having a mix of everything.”

El-Assal said she loves to see the students performing on stage.

“They need these opportunities, and we are planning on doing something in the spring, because this was such a success,” she said. “I think it is something we are going to continue.”