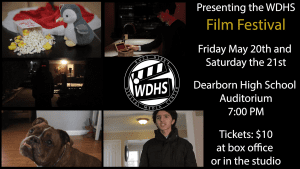 DEARBORN — Several Dearborn High School film students were recognized recently by the Michigan Chapter of the National Academy of Television Arts and Sciences.

The public can view some of the award winning films at this year’s WDHS Film Festival on May 20 and 21. The event starts at 7 p.m. both nights.

Tickets are $10 and available at the door or before the event at the WDHS studio inside the school.

Films recognized this year by the Michigan Chapter include:

Dearborn High School also was a recipient of the 2022 John Schimpf/Lynne Boyle Scholarships and Grants to help “students as they rise to the challenge of serving our society and ascending to become the next generation of journalism and media industry professionals,” according to the Michigan Chapter’s website.