Q: My aunt is 62 and she has colon cancer. It turns out that polyps are common among my family. I am 39 now. Should I have a screening colonoscopy earlier than 50? Sharon E., Taylor A: Although you do not have a first degree relative with colorectal cancer, the combination of both colorectal cancer and polyps in relatives could increase your risk. Taking the route of caution and getting screened early is advised. It’s also good to know that when you have documented family history of the disease, insurances allow a screening … END_OF_DOCUMENT_TOKEN_TO_BE_REPLACED

Q. I am 21 years old and regularly have stomach aches and cramps. Should I be concerned about it enough to see a doctor? Celia D., Romulus A. Seeing a doctor would be prudent. An EGD (esophagogastroduodenoscopy) scope of the upper digestive tract is indicated to make sure you do not have any bacteria in your stomach or any malabsorption problems due to celiac disease. * * * Q. I’m on a protein pump inhibitor to manage my acid reflux but it isn’t helping anymore. What are the alternatives? Patrick B., Dearborn A: … END_OF_DOCUMENT_TOKEN_TO_BE_REPLACED

Q: Can chronic lower back pain damage nerves in your gut and cause constipation? Would steroid injections help? Nancy S., Allen Park A: Chronic pain can damage nerves, but it is highly unlikely that it has damaged nerves in your digestive system. It is likely that your constipation is a side-effect of consuming pain medications. Let your prescribing physician know about the side-effect you are experiencing. Lumbar epidural steroid injections may be helpful for managing your back pain; they should allow relief so that you can reduce … END_OF_DOCUMENT_TOKEN_TO_BE_REPLACED

Q: I’ve just been diagnosed with celiac disease. What are the main things that I should be concerned with right now? Stephanie W., Taylor A: Gluten, gluten and gluten! It is the offending agent to your gastrointestinal tract. Eliminating it will aid in healing the bowel and in turn improve absorption of nutrients. It has been postulated that with uncontrolled celiac there is a small chance of development of a type of stomach lymphoma. Hence it is important to completely eliminate gluten from the diet. * * * Q: Is has … END_OF_DOCUMENT_TOKEN_TO_BE_REPLACED

Q: My husband has achalasia. The prospect of having life-long acid reflux after the esophagomyotomy surgery sounds awful. Are there other options we should consider? Lorrie P., Flat Rock A: There are two other, more conservative options available now. Rather than surgery, he could undergo dilation of the esophagus under fluoroscopy at an outpatient facility. A large balloon is inserted into the esophagus and expands to dilate the muscle preventing proper swallowing. The second option also involves endoscopy and an injection of … END_OF_DOCUMENT_TOKEN_TO_BE_REPLACED 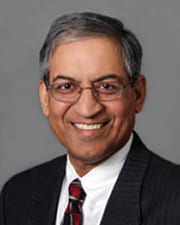 Sudarshan Singal, M.D. Q: I have a difficult time flexing my abdomen or sucking in my stomach without feeling some pain. Even when there is pressure applied from leaning against something I have discomfort. Should I have an ultrasound to find out what is going on? Carolyn G., Dearborn A. If you do a lot of abdominal exercises, some pain from flexing or sucking in your stomach would be normal. However, if you have other symptoms, like nausea, discomfort swallowing food or any change in bowel habits, then I definitely suggest that … END_OF_DOCUMENT_TOKEN_TO_BE_REPLACED

Q: I’m 50 and do not have insurance so I cannot get a screening colonoscopy on schedule. If I had a polyp, how long would it take to turn into cancer? Do polyps always become cancerous? Adam G., Livonia A: Polyps come in many different shapes, sizes and beahviors. Some take many years to progress, some do not progress at all and some progress very fast. Not all of them become cancerous. However, predicting the behavior of polyps is quite difficult so timely screenings is very important. ColonoscopyAssist is a great resource for … END_OF_DOCUMENT_TOKEN_TO_BE_REPLACED

Q. Is pain that originates at your buttock and travels down the back of your leg usually a nerve or disc problem? What kind of evaluation is done to diagnose the problem? Farrah J., Dearborn Heights A. It is nerve irritation usually caused by a bulging or herniated disc. An MRI or CAT scan can help to determine if there is an anatomical cause. See your family physician or primary care doctor for a thorough physical exam and referrals for imaging and possibly physical therapy or pain specialist consultation. Q. My rheumatologist … END_OF_DOCUMENT_TOKEN_TO_BE_REPLACED

Rana Sabbagh, M.D. Q: When I was a teenager I was bulimic. Now that I am middle-aged, I am starting to experience nausea, bloating and some other digestive problems. Could my former condition be affecting me now? Kathleen N., Taylor A: Yes, your former condition could have altered the contraction complex within your gastrointestinal tract or as I like to call it, "the stomach nervous system." Also, it is possible that the organ itself became used to the stimulus and action of vomiting and purging, so after dropping the … END_OF_DOCUMENT_TOKEN_TO_BE_REPLACED

By Linda Phillips, R.N. Q: I am researching my options for cataract surgery. Why would someone choose laser instead of traditional surgery? Roseanne F., Southgate A: The primary benefits of choosing laser cataract surgery are that the surgeon can make more precise, finer incisions customized to each patient’s eye. Other improvements are increased safety, comfort for the patient during surgery and increased predictability of visual outcomes. Treatment for astigmatism can also be done to reduce dependency on glasses. Q: … END_OF_DOCUMENT_TOKEN_TO_BE_REPLACED