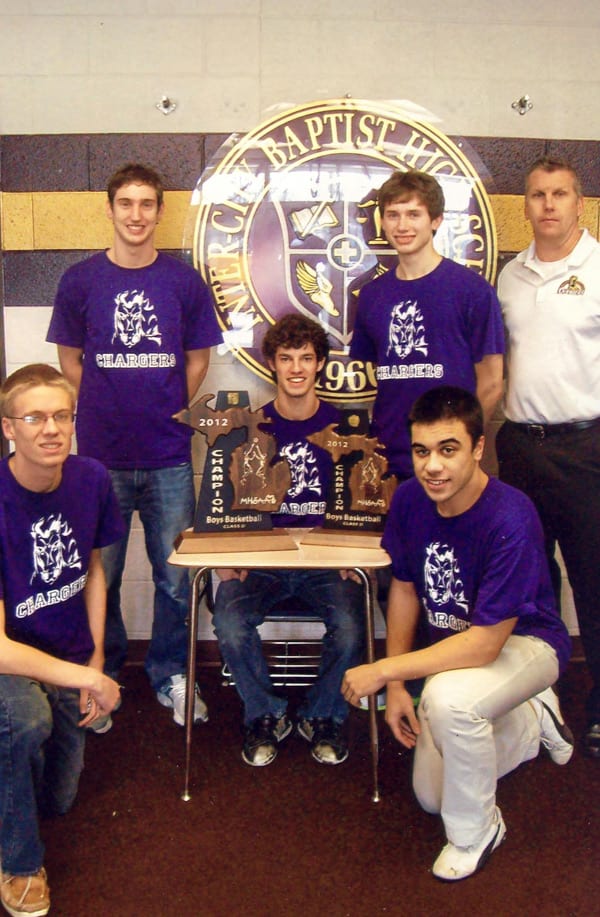 By Daniel Gretzner
Mark Kraatz, head coach of the Allen Park Inter-City Babtist boys’ backetball team, led his 2011-12 squad to Class D district and regional championships. These exceptional results all happened within the past two weeks. The Chargers finished with a fine 17-9 record.

“Our kids played well and gave it all they had during March Madness,” Kraatz said. “We had a good run. I’m proud of what we were able to accomplish at the school and on the basketball court.”

On March 13, APIC cagers dumped Lansing Christian, 48-39, in winning their regional title game. Evan Kraatz, just a sophomore, burned the twine for 19 points to lead the way for the Chargers offense. Evan is the son of coach Kraatz and plays point guard.

The small Downriver parochial school bowed out in the state quarterfinals on March 20. They fell 50-39 to Climax-Scotts (25-1) in a contest played in Jackson. The game was closer than the score indicated. Poor free-throw shooting plagued the local quintet during the second half.

In past years, and even a few decades, APIC teams have won a number of district and regional championships. This year wasn’t any exception as they continue to excel on the hardwoods.

Robichaud cagers bounced in ‘B’ quarters by defending champs
Hoop season for the Dearborn-Dearborn Heights high school teams came to a close when Dearborn Heights Robichaud (21-4) lost to Lansing Sexton in the Class B state quarterfinals on March 20. The cage tilt was played in Chelsea and the Bulldogs wound up on the short end of a 56-37 score.

Head coach Vince Crump watched his varsity cagers claim district and regional titles, before going down to Sexton, the defending state champs. Senior Khalig Spicer was high scorer for Robichaud in the quarterfinal encounter. He hit for a double-double, scoring 17 points and hauling 10 rebounds.

Robichaud slipped past Detroit Douglass in the regional final on March 14, edging out their rivals, 51-45.

Winter sports are now giving way to the spring sports season for all greater Dearborn and Downriver high schools. Baseball and softball, along with other spring sports, are starting up soon. The Times-Herald/Sunday Times Newspapers “Focus on Sports” column keeps our loyal readers informed about sports activities on the local scene.