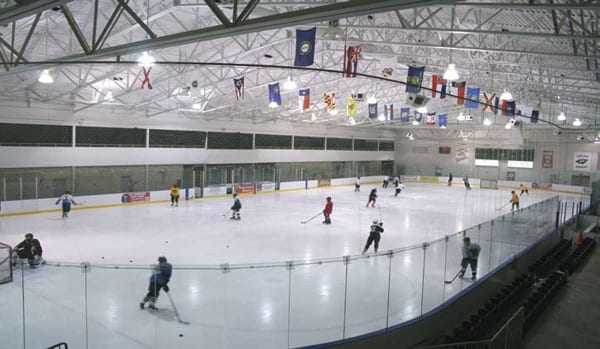 Photo courtesy of the city of Taylor
The Taylor Sportsplex hosts hockey, indoor soccer and other athletic activities. Last week the city of Taylor sold ownership of the complex to JRV Consulting, which operates the center.

By JAMES MITCHELL
Sunday Times Newspapers
TAYLOR — The decision to sell the Taylor Sportsplex for $6 million was approved by a close vote of city council Tuesday, a 4-3 decision that reflected mixed opinions on the sale.

“It’s in the best interest of the city,” Mayor Jeffrey Lamarand said. “I think it’s a catalyst; there’s not really a downside to us.”

Lamarand presented the plan to sell the sports center for $6 million to JRV Consulting, which operates the center under contract to Taylor. Included in the proposal was the sale of 14 acres south of the Sportsplex for likely development as a hotel and restaurant.

Dissenting councilors John Delo, Rick Sollars and Dennis Stapleton supported the idea of the sale, but said last week’s vote was premature and that further assessment of the complex and property value was needed.

“This is a purchase agreement that poses more questions than answers,” Delo said. “I’m certain someone didn’t just walk into the mayor’s office last Thursday. There must have been time for an appraisal to be considered.”

Delo said that too much of the plan relied on projects that have not yet been confirmed, including commitments from a hotel or restaurant chain.

Lamarand said the purchase will spur development and bring revenue to the city, however the price tag does not impact the looming $5 million debt, for which a 5-year elimination plan was submitted to state officials earlier this month. The $6 million from the sale would, by requirement, pay down the city’s existing Tax Increment Finance Authority debt. There will, Lamarand said, be tax revenues realized from both the Sportsplex and development sparked by the sale.

“This is a win-win,” Lamarand said. “Not only will Taylor pay down a significant portion of debt, JRV will move their corporate offices from Ohio to Taylor.”

Under the terms of the agreement, plans for a hotel and restaurant must be in place within two years.