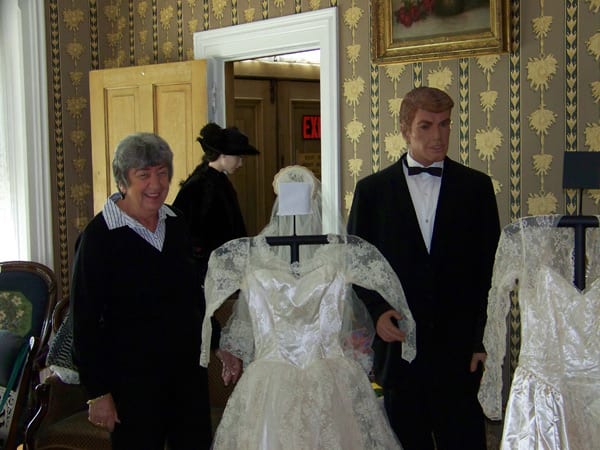 By JAMES MITCHELL
Sunday Times Newspapers
TRENTON — A museum’s collection is gathered slowly, one patient piece at a time over years and decades.

The campaign to restore and preserve the Trenton Historical Museum is, appropriately “one puzzle piece at a time” as the Historical Commission and Society hope to preserve the Moore-Boelter home that houses local history.

A 2,000-piece jigsaw puzzle depicting the two-story home — built in the late 1800s complete with gingerbread trim and green shutters — is being assembled at City Hall, and once complete will join the museum’s growing collection. Puzzle pieces are available for donors to contribute $30 each; so far, Linda Murdock of the Trenton Historical Commission said about 300 pieces have been sold to fund new windows, painting and foundation work.

Putting the pieces together is part of the mission of both the Historical Commission, a nine-member panel appointed by the mayor to oversee the home, and the Trenton Historical Society, which formed in the 1980s as a non-profit organization designed to collect and preserve the community story.

Society President Carol Hendricks, a volunteer of 30 years, said an early emphasis was on keeping track of local schools.

“One of the goals of the Society was to preserve the school history,” Hendricks said.

A room at Trenton High School is occupied by the Society, and Hendricks said that students of every generation show an interest in local history, both at the high school and during tours given to fourth- and fifth-graders.

Fundraising for the museum is a multi-faceted effort, whether through special exhibits such as the display of antique wedding dresses now showing, or during Mid-Summer Festival days.

In spite of the name and designation as a state historical site, Murdock said she doesn’t like to use of the word “museum” in describing the collection. The house built by John and Sarah Moore is decorated and equipped typical of homes from earlier eras, with a wood-burning stove and ice box dominating the small kitchen, a radio suitable for families to gather ‘round, and bedrooms equipped with chamber pots.

“A museum keeps things under glass,” Murdock said. “This is a living house.”

A house with a collection that tells the story of a community, gathered one piece at a time like the components of a puzzle.

For information on buying a puzzle piece, contributing to the museum or learning more about Trenton history, go to www.trentonhistoricalsociety.org or call 734-675-2130.