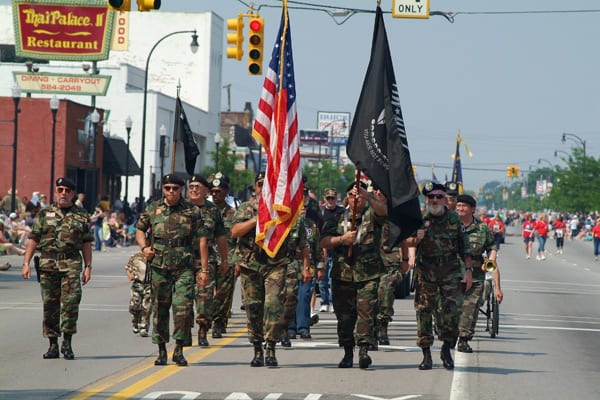 DEARBORN, Mich. – For the 88th year in a row, Dearborn will remember those who gave their lives in service to our country on Memorial Day, May 28, with a parade starting at 10 a.m. at Greenfield Road and traveling along Michigan Avenue to City Hall at Schaefer.

The day will also include a solemn funeral procession in honor of veterans who died without resources, and a Remembrance Ceremony at noon at City Hall Park.

Winter, who had a distinguished career in defense and aerospace engineering, will deliver the keynote address at the Remembrance Ceremony.
Congressional Gold Medal honorees

Joining the parade in 2012 will be the Montford Point Detachment Marine Corps League. It was recently announced that they will be awarded the Congressional Gold Medal for being the first African Americans to serve in the Marines.

Popular flyovers of military and historic aircraft will be part of this year’s parade once again. They include a B-25 Mitchell Bomber, a twin-engine bomber used in WWII and for four decades after. Flying in the B-25 as guests of the DAWVC are Iraq veteran Ryan Long and his father, John.

Also included is a C-47 Dakota, which is a military transport plane used extensively in WWII and beyond, including for paratroop movement.

Land vehicles in parade courtesy of the Detroit Arsenal of Democracy and as part of the 101st Airborne Division entry are an M35, a M38 Jeep and a WC51.

Music will be provided by the 338th Army Reserve Band and eight Dearborn school bands.

The parade focuses on the true meaning of the day.

“As a child growing up, I was raised to show respect to our fallen,” said Wilson. “This parade will honor all men and women who paid the ultimate sacrifice, and all those who unselfishly served, so that they are never forgotten.

More on the Cold War
“I want to especially recognize those veterans of a very tense time in our history,” said Wilson, who noted that 125 U.S. servicemen are unaccounted for from the Cold War.

“From the German Czech border to the Cuban Missile Crisis and the brink of nuclear war, in both overt and covert operations, our military sailed the seas and patrolled the skies to keep peace as we confronted a Soviet threat,” said Wilson, who is a Cold War veteran who was stationed with Armed Forces Central Europe NATO headquarters in the Netherlands from 1972 – 1974.

Honorary funeral procession
For the third year, the parade will also include a horse-drawn caisson carrying the cremains of veterans who died without resources and never received proper internment. The DAWVC is committed to finding deceased veterans in line with the “Missing in America” project.

This year, four WWII veterans whose cremains have been in a local funeral home since the 1980s will receive military honors. The service will be performed by the U.S. Army Ritual Team at the noon Remembrance Ceremony.

Parade live on government access channel
The Memorial Day Parade will be televised live on City of Dearborn Television, which is Comcast Channel 12 and WOW channel 10. It can also been seen on AT & T U-verse and at www.cityofdearborn.org.