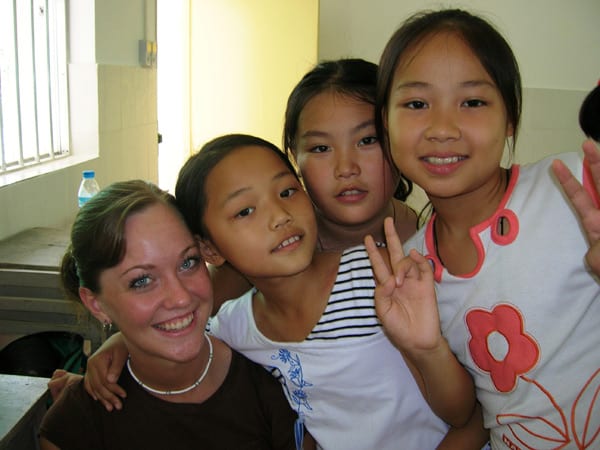 Photo courtesy of Dave Gorgon
Christy Lynn DePriest Wright (left), shown during her teaching trip to China, died in May 2010 of epithelioid hemangioendothelioma, a rare form of cancer of the outer lining of the blood vessels.

TAYLOR — Two Downriver events have been scheduled to raise awareness and support for the Taylor-based Christy’s Legacy of Hope charity for orphaned children around the world.

The Year of the Dragon Baby Shower Luncheon is set for noon to 2 p.m. Saturday at The Guidance Center, 13111 Allen Road, Southgate.

Participants in the informational gathering will learn about why Christy’s Legacy of Hope was established and how orphaned children touched the heart of Christy Lynn DePriest Wright. The nonprofit organization was established following the May 2010 death of the Taylor woman.

Before she died of a rare form of cancer, Wright spent five weeks teaching English to orphaned children in China. She fell in love with her students and hoped one day to return to China and care for the orphaned children. The charity will continue Wright’s vision, passion and commitment to orphans throughout the world.

Karen DePriest – Wright’s mother and president of the charity – said the day will feature a visit from Autumn Scowcroft, a woman from South Carolina who will talk about her experiences working in orphanages in southeast Asia. Autumn worked with the same children Wright loved.

Scowcroft’s family “has adopted eight children over the past few years, all with special needs,” said DePriest, who lives in Taylor. “She worked in orphanages this summer for two months, just loving Christy’s little friends and working with the nannies there.”

Attendees will “learn more about orphans across the world and what we can do to help,” DePriest said. “I think it is going to be very special.”

Participants in the luncheon will be served an Asian-inspired buffet catered by Carlson Catering, including a fortune cookie for dessert. A company that provided fortune cookie favors for Wright’s wedding five years ago will provide the cookies, donating half of the cost for the event.

Only 75 tickets will be sold for $15. Participants are asked to donate a baby bib or a pair of socks for someone up to age 15. Many orphanages do not have heat or bedding so socks for warmth and bibs to keep their clothes dry are needed and appreciated.

Checks should be made out to “Christy’s Legacy of Hope” and sent to 6816 Fellrath St., Taylor, MI, 48180. Organizers request that the names of the attendees and an email address. A confirmation and complete details will be sent by email.

Events are scheduled throughout the day, as well as two bounce houses for kids and 30 vendors selling their goods.

The schedule includes a performance by the Hoover Middle School Band at 11 a.m., a karate demonstration by Heritage Martial Arts at noon, Zumbatonic for kids at 1 p.m., a Polynesian dance performance by Ballet Americana at 1:45 p.m., a Mills Gymnastics demonstration at 3 p.m., and Zumba at 5 p.m. Singer Celia Nip, who recently released her debut song, will entertain throughout the afternoon.

There will be face painting, balloon art, use of the Sportsplex golf practice net, pumpkins for sale, a photo booth and a food sales cart manned by Relish the Dog.

Admission is $5 per person with all proceeds benefiting Christy’s Legacy of Hope.

“Because of Christy’s involvement within the community, it has been very important to me to keep as many events as possible right here in Taylor,” DePriest said. “I have found the most wonderful people are right here and they have all been extremely generous and kind. The (Sportsplex) is no exception through their support of me and the organization. They have welcomed Christy’s Legacy of Hope beyond my expectations. I could not be more grateful to all the people that have helped get this charity up and running. Christy would be smiling seeing all that is being done for her little friends.”

For more information about Harvest the Smiles, go to www.christylslegacyofhope.com, check out Christy’s Legacy of Hope’s page on Facebook, call 313-291-0352 or send email to [email protected]

MORE ABOUT CHRISTY LYNN DePRIEST WRIGHT
Family and friends describe Wright as an energetic, beautiful, young lady who had many passions in life.

At Truman High School, she was involved in many facets of student life. She was president of her class two years, a cheerleader, prom queen, a member of the homecoming court, high school news reporter for The News-Herald Newspapers and a member of the National Honor Society. She worked for the city of Taylor and played the flute. She was also involved in a variety of activities at Beacon Baptist Church.

Also, Wright enjoyed working with children and volunteered to do many activities with them.

After high school graduation, Wright went on to Liberty University in Lynchburg, Va., where she received a master’s degree. It was during her years at Liberty that Wright traveled to China to teach English, attending to the needs of children there. Her passion for this cause can be traced to an essay she wrote while attending Hoover Middle School. She wrote about a baby she saw in a magazine who had been abandoned by his parents. The essay was published by Kaleidoscope Magazine. Her trip only increased her desire to return to China one day.

Wright married Corey Wright in the summer of 2007 and they both felt compelled to fulfill this dream. They were residing in Virginia and were only two years into their marriage when she was diagnosed with hepatic epithelioid hemangioendothelioma, a rare form of cancer of the outer lining of the blood vessels.

Family and friends formed Christy’s Legacy of Hope in her memory.

For more information on the charity and events that support it, go to the website.