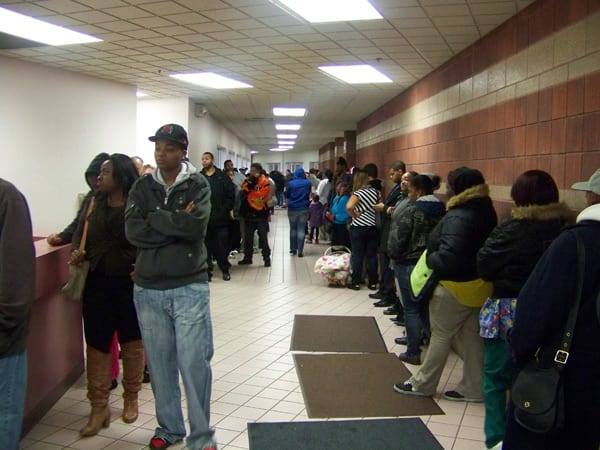 Photo by James Mitchell
Crowded polling locations greeted voters in Taylor at the Human Services Center at Eureka and Lange roads. A stronger-than-normal turnout resulted in waiting times of up to three hours for casting ballots.

A ballot question seeking renewal of a tax levy of up to 18 mills for the Taylor School District, first approved in 1993, earned 12,264 yes votes — 58 percent of the ballots cast — against 8,860 ballots rejecting the proposal. Voting results remain unofficial pending final confirmation.

The tax levy that generates an estimated $11 million annually for school operating costs will continue through June 30, 2018. The levy applies to industrial, commercial, agricultural and second-home properties. The tax represents about one-fifth of the school district’s revenue.

Election day in Taylor included long lines at the polls and a reported arrest at the Human Services Center at Eureka and Lange roads. Two of the city’s city’s precincts were polled at that location. The parking lot overflowed early, a condition that remained through closing time. Police and reserve officers maintained a steady presence throughout the day.

A 28-year-old woman was said to be annoying election workers, and refused an offer to be given priority standing in line. Shortly after 8 a.m. the woman was arrested after causing what witnesses called a disturbance. A second disruption at the same location occurred about 11 a.m. when two women fought after one accused the other of bumping her child.

Voters reportedly waited more than two hours on average to cast votes at the location.

Taylor voters leaned heavily Democratic in this year’s general election, with more than 64 percent of the ballots going to President Barack Obama. Veteran U.S. Sen. Debbie Stabenow drew more than 70 percent of the votes against challenger Pete Hoekstra, and longtime U.S. Rep. John Dingell was elected to his 29th term in Congress.