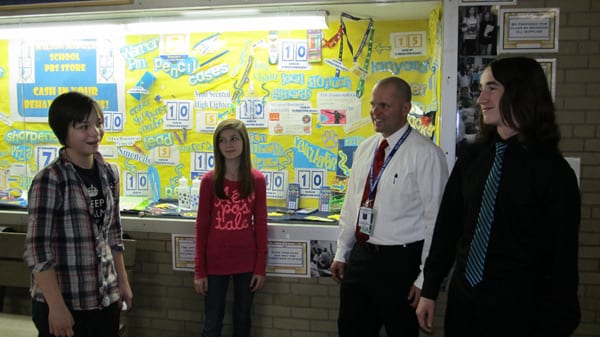 “If you come here and you’re a sixth-grader there are so many new things,” Gutenschwager said. “Seven different classes, you’re running around the whole building and you’ve got new lockers. If you are not used to it and you have someone who has been here a couple of years, they know how it works… they can really lead you and guide you. And maybe that person in a few years will be leading another new person.”

Wilson Middle School personnel said that at the first or primary level, most students respond positively to a prevention strategy that teaches behavior that is acceptable and uses consistent, pre-correction procedures to create a school-wide positive reinforcement system that randomly rewards students who do what is right and make the right choices.

They said the second level of PBIS helps a smaller percentage of students whose behavior and academic problems put them at risk, and who may need more social skill support and tutoring.

At the third PBIS level, students with persistent disciplinary problems receive intensive and individual interventions, staff said, and family and friends of a student help launch a behavior intervention plan.

Wilson school personnel, who say they are successfully using the PBIS program for a third year – one year at level one and two more years with level two added, say they hope to launch level three soon.

Teacher Jenna Waters said that at tier-two they try to put students needs first, eliminate any stigma and maintain privacy, identifying students as being on the tier-two plan, not being “tier-two students.”

“We have them match with a mentor teacher, and all the students (on tier-two) aren’t coming to one (classroom),” Waters said. “We try to put the student first… this is something that can help them.”

Waters said they had a eighth-grader and former student on tier-two, who is now a successful athlete and student leader, with improved grades, as well as a tier-two peer mentor, come in and talk to this year’s sixth-graders on tier-two.

“All his grades (are) up, (and) he’s in a lot of sports,” Water said. “He’s seen as a leader throughout the school. (It) was… motivational for them to see someone who came from where they’re at and… that this program really did help.”

Waters said the student talked about how he wanted to succeed, make contact with his mentor teacher and earn rewards.

Each student mentor gets out of their class a few minutes early and goes to their mentee’s class before it ends. They develop a relationship with the younger student as they go with them to their locker to get their supplies and make sure they get to class on time. They also meet monthly to go over their grades and spend time together. Older students also introduce younger students to their friends in other grades.

Seventh-grader Erin Crnkovic, 12, said when she watched her eighth grade cousin mentor a younger student last year, she saw firsthand that it gave her classmate more self-confidence, more friends and helped her get along better with her peers. She said she has observed similar changes in other classmates who had mentors last year.

“So this year I see them and they’re doing great,” she said. “They have friends and they are getting good grades. They are on teams.”

Gutenschwager said there is less bullying in the school with the PBIS system and it is easier to be kind.

“There is a lot more harmony; everybody is getting along with each other,” Gutenschwager said.

He said it is not just rewards, raffles and spendable behavior bucks that make people want to behave better.

“People have more of a motivation to learn and be better,” Gutenschwager said. “They might admire some of the older people and want to do that one day, be like them.”

Sixth-grader Emma Rankine, 11, said the PBIS program makes it easier to be kind.

“We know we have another set of eyes that are working with them closer, which is what we feel they need to be successful,” Krajewski said, “just seeing how a sixth-grader has a mentor, and in seventh grade they don’t need one, and then maybe by eighth grade they can become a mentor.”

He said PBIS gives students a positive system to improve their grades and classroom behavior.

“We think that the mentees really buy in to their mentors,” Krajewski said. “And it helps all students be a little bit kinder and nicer to all of these people… I think it does open up everyone’s… minds to be a better person.”