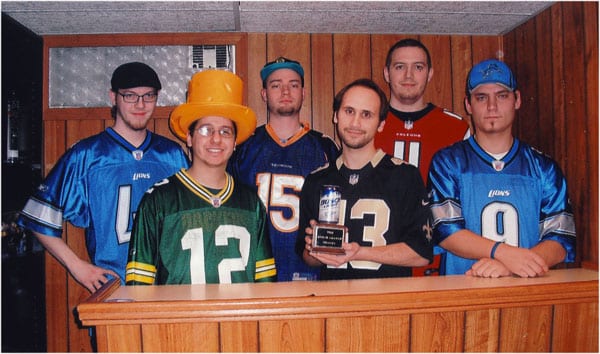 Fantasy leagues and teams in the sports world have been gaining momentum on the local level. One such Dearborn group, the Edsel Ford Alumni Fantasy Football League, is about to complete its second year of operation.

Austin Ramos is the EFAFFL commissioner. The 2008 Edsel grad is co-founder of this 10-team league. Perks of going to the league champion are a quality team jersey and a special engraved trophy.

“We are a bunch of

young adults who range in age from 21-25 and enjoy having our own draft and picking out players we like from a list of the top NFL performers,” Ramos said. “We have 10 teams, have lots of fun and meet weekly to sort out the results.”

Other key personnel in the EFAFFL group are fellow Dearbornites Jordan West and Dale Densel. “Focus on Sports” asked Ramos what it takes to be a part of a fantasy sports league.

“A combination of skill, luck and results of your drafted players individual stats could win you a fantasy championship,” he said.

The results of each game and the entire season are based on stats compiled by ESPN.com computers that are used by fantasy leagues nationwide.