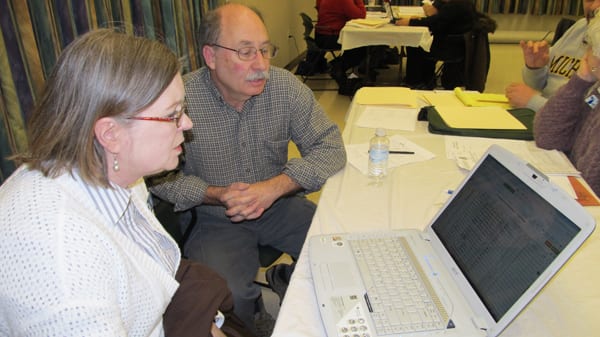 Kathy Gibson (left) of Southgate and her husband, Gary Gibson, show some of the online records they use for genealogy research Feb. 19 during a genealogy workshop at Trenton Veterans Memorial Library.

TRENTON – When Kathy Gibson of Southgate started searching for her ancestors online, she found a future family member.

She met her soon-to-be husband online in a Scottish chat room.

“That’s the one thing that Gary and I have in common,” Gibson said. “What… brought us together was our family, our story, our lineage, our genealogy. We were excited and it’s kind of one of the reasons why we married.”

Gibson and other members of the Monguagon Chapter of the National Society of the Daughters of the American Revolution help people, even non-DAR members, learn how to research their ancestry in workshops like the one held Feb. 19 at the Trenton Veterans Memorial Library.

The DAR is a not-for-profit, non-political women’s service organization dedicated to promoting patriotism, historic preservation and education. To join, applicants must prove a lineal bloodline from an ancestor who helped achieve American independence.

The Monguagon Chapter, begun in 1993 and based in Trenton, serves Downriver. They meet on the second Saturday of each month, except in the summer.

Local DAR members said they have many reasons for continuing to research their genealogy even after they prove their American independence lineal bloodline.

Nancy Lecky-Chascsa said she started researching her family tree because she was proud of her ancestors and their contributions to American independence, and was curious about her family tree.

“One way that I could honor them was by recognizing their contribution,” Lecky-Chascsa said.

“The most amazing thing about it is that when you start asking folks like us, we have stories that we could tell until tomorrow morning of the things that we’ve found,” Gibson said.

When her mother died, Gibson inherited documents that revealed she had a Revolutionary patriot in her family tree, which she did not know before.

It is exciting when you discover a new branch of your family tree, Vangoff said.

“When you’re in a library and you find something you want, all of a sudden you’re ‘Ooh!’” Vangoff said, throwing her arms up in the air. “Everybody knows what you’re doing –they know you’ve found what you’re looking for.”

Gibson said when researching a family tree, discovering living cousins can sometimes fill in part of a family tree. She urges caution, though, because finding false, undocumented ancestral information online is common.

Wills and funeral homes in the area of one’s ancestors often provide valuable information, she said.

Lecky-Chascsa has a family letter written in 1814 from a son in Kentucky to his father in Virginia.

“To me, it’s a treasure,” Lecky-Chascsa said. “Those kind of things you just can’t replace.”

She said she prefers to go back to county courthouses and state libraries to research though many courthouses in the southern United States burned down during both the Revolutionary and Civil Wars, though.

“I like to see the original documents – I like to have them in my hand,” Lecky-Chascsa said, referring to deeds and marriage applications. “And (to) know your ancestor saw these… you get their signatures… there’s just nothing like it to see that original document.”

The DAR has published a book called “Forgotten Patriots” that focuses on the important contributions made by black and American Indian patriots of the American Revolution, Lecky-Chascsa said, which has allowed the DAR to diversify its membership.

Lecky-Chascsa said she has linked 18 male ancestral patriots to the American Revolution from both her mother and father’s family, and hopes someday to prove that one of her female relatives is an American independence patriot.

Vangoff said she had a good start researching her family tree with some paperwork a relative gave her, but researching genealogy can be unending.

“It’s like doing a puzzle,” Vangoff said. “When you think you’re done, you’re really not done because you go off on another tangent, and you find another whole section.”

“It’s so much fun,” Gibson said. “And it is so addictive… you think about it daily. We work on it daily.”

For more information about the Monguagon DAR Chapter, contact Lugene Flores at (734) 955-6440 or [email protected] For state information, go to www.michdar.org.