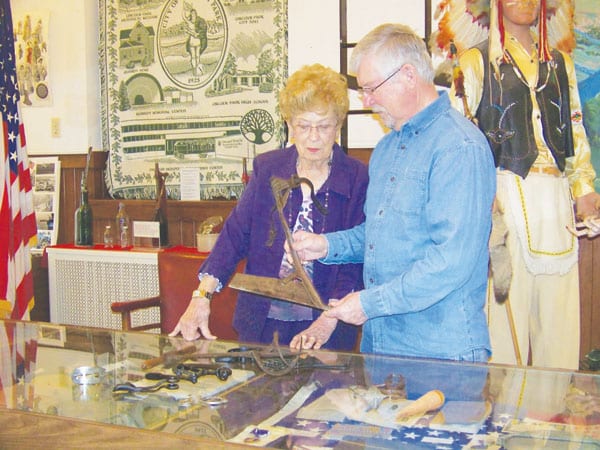 LINCOLN PARK — Bob Wittersheim’s collection of more than 250 antique gadgets and tools often leave people wondering, “What the heck is that?”

He quietly shows objects such as a piece of wood that looks sort of like an eight-inch screw, perhaps an inch in diameter at its widest point.

Not a screw, nor a drill, Wittersheim said. Instead the wood plug was used to patch bullet holes in early military planes.

The plug will be among a few dozen pieces from Wittersheim’s collection that he will display at 7 p.m. March 6 at the Lincoln Park Historical Museum, 1335 Southfield Road. “What the heck is it?” will be asked by many during the presentation of the same name, sponsored by the city’s Historical Society.

Wittersheim, a retired interpreter from Oakwoods Metropark Nature Center, began collecting vintage tools and kitchen gadgets in the early 1980s, a lark that became hobby and passion as his fascination with people’s innovative nature grew.

Long before automated devices left most cooking and farming chores to machines, inventive minds came up with truly creative methods for preparing food, cracking walnuts, measuring sugar and bringing in the seasonal crops.

The presentation is framed around the typical week in the life of a midwestern family in the early 1900s, when each day’s schedule included designated tasks such as wash-day Monday. Wittersheim began doing presentations in the early 1990s and has since entertained and educated groups at historical societies throughout Downriver and southeast Michigan.

Household chores, of course, were clearly segregated between what was considered men’s or women’s work, and Wittersheim said he’s tailored his talk to gender-specific audiences: Women made use of household and laundry devices while the men crafted tools such as a blade strapped to a leg for cutting through the corn crop.

Along with the pieces from his collection, Wittersheim encourages attendees to bring along oddball items found in attics, barns and sheds to try and stump the expert: Easily done, he said, as the tools reveal an impressive amount of innovation and imagination to ease chores that our contemporary lives overlook.

The public is invited to an evening of curious questions, light refreshments and multiple questions of “what the heck is it?” For more information contact the Museum at 313-386-3137.