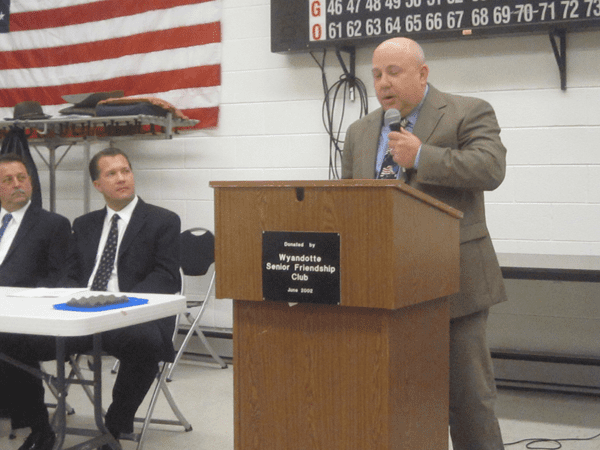 By ANDREA POTEET
Sunday Times Newspapers
WYANDOTTE – The city council could look much different after a May 7 election.

Ten people running for six city council seats were among the 15 candidates for city offices who introduced themselves to the public Wednesday at a candidate forum at the Copeland Center and hosted by McKinley Neighbors United and Garfield Neighbors United.

Each candidate had five minutes to introduce him or herself to the audience, review their backgrounds and qualifications, and list ways they would improve the quality of life and business in the city.

Stec, a lifelong resident and 1976 graduate of Our Lady of Mount Carmel High School, served as mayor and as a council member for two prior terms before being re-elected four years ago. In his most recent term, he said, the council has succeeded in bringing in more families to the area through its Neighborhood Stabilization Program, which turns blighted houses into revamped affordable housing.

“There’s nothing better for a community than to have parents and children in it,” Stec said.

Incumbent Leonard Sabuda detailed some of the many positions he’s held in the city since beginning as former Mayor Jim DeSana’s administrative assistant in the 1970s. Since then, he has taken his own turn as mayor and served on city council. He also owned local 7-Elevens.

If re-elected, he said he will fight to return the city to the quality of life residents once enjoyed, by working to improve housing values, maintain balanced budgets, eliminate blighted properties and add new housing.

“I’ll put in every effort to make the quality of life in this town – if not good – it’s gonna be better,” he said. “It’s gonna be great.”

Incumbent Dan Galeski detailed his over 50 years of service to the city, including 38 with the Wyandotte Police Department. A lifelong resident, he said he wants to continue to make changes to better the city, like saving taxpayer’s money by eliminating unnecessary projects and redeveloping vacant properties to get them back on the tax rolls.

“I’m ready to lead and not to follow,” he said. “I know my views are different than others’ but you have to keep trying if you want to make changes.”

Incumbent Sherri Sutherby Fricke is in her second term after being elected to the council in 2005. A real estate agent since 1986, she serves on the national and state associations of Realtors.

Her knowledge of real estate, she said, gives her insight into the financial downturn of the past years and the declining housing values in the city that have affected its general fund.

“This is nothing we had asked for,” she said of the economy. “This is something that happened all over the world. It is very real and harmful to neighborhoods, but it’s something we’ve been working on steadily and steadfastly.”

She said if re-elected, she will continue to be open and available to constituents and hopes to focus more on redeveloping the city’s north end, recreation department and business district on Fort, the city’s “front door.”

Challenger Johnny Kolakowski, a retiree of the restaurant business, lifelong resident and former city council member, said he is running for a seat because he wants to help return the city to its former glory.

“I want to come back to the city council and continue what we were doing,” he said. “We were really dusting up the neighborhoods. We were helping the business people out and we need to make this a destination city as it once was.”

Kevin Van Boxell is hoping to join the council after 15 years on the Wyandotte Public Schools Board of Education. A retiree of a family-owned trucking business, he will retire from the U.S. Navy in the next month. He said his business experience gives him insight into legal, labor, insurance, and financial issues that will serve him well on the council.

“I’ve always believed that whatever you participate in, you should try to improve it,” he said, “try to make it a little bit better.”

Former City Assessor Theodore Galeski is an appraiser for Wayne County. He said his background will help him on the council.

“It’s important to have knowledge in all areas of government,” he said, “how to create budgets, how to eliminate things that aren’t so important.”

He also said if elected he hopes to investigate practices of cities that have been successful during the economic downtown and emulate them.

Val Zavala hopes to bring his 25 years of experience on the Wayndotte Police Department to use on the council horseshoe.

He said he is running on a platform that the council needs to be more efficient with fewer resources.

“Are things gonna turn around in the next two or three years?” he said. “I don’t know, but I’d like to be one of the people that force our government to say ‘Look, we can’t spend any more money. We can do with what we got and that’s it.’”

Don Schultz, a co-founder of Garfield Neighbors United, said he wants to bring the love of his community that inspired him to help form the group to the council, where he would be a “champion of code enforcement.”

He is the vice president of the city’s planning commission and on the historical commission.

The father of current Miss Michigan Jaclyn Schultz, his ideas include a database of who owns rental properties through the municipal department to help combat neglectful landlords.

Ted Miciuria Jr. said he hopes to bring his background in construction to use on the council.

He said he hopes to help build a stronger police and fire presence to keep the city as nice as it was during his childhood, upgrade the city’s power plant and develop along the waterfront to lure in more visitors.