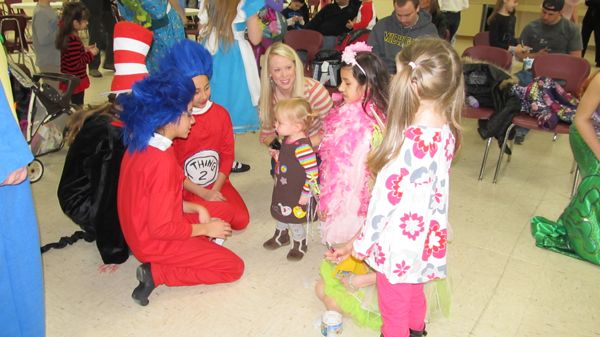 “Just seeing the looks on some of their faces when they saw the character come alive, you could tell that the kids liked books, they like to be read to and they really seem to enjoy the story,” Hatty, a Trenton resident and Rotary International member said.

Noel Jackson said literacy has always been important to Rotary International, and while Trenton Rotary has supported literacy projects in the past, this one brings costumed book characters to life for children.

“This is the first time ever (for “Characters Alive”), and so far it’s really… fantastic,” Noel Jackson said. “This is an extra special… type of event.”

The characters, especially the princesses, are a big hit with children, Debbie Jackson said, which encourages them to read their storybooks.

“The kids are very excited,” Debbie Jackson said. “Cinderella is in there, and Belle, Snow White, (and) Ariel.”

She said while they hoped to collect many books, the main purpose of the event was just to make reading fun.

“It’s such a digital age that a lot of kids are not really getting that experience, even if they have the access and means to have books,” Debbie Jackson said. “So this is just a way to make it fun and something special.”

Freckleface Strawberry, a book character by Julianne Moore and portrayed by adult DYPAC alumnus Julienne Flotke, enjoys interacting with children and encouraging a love of reading. She said many adults read at a third grade level or below, so it is important to get children interested in becoming strong readers at an early age.

She said the children get excited when they see the costumed characters.

“Ariel has been a big one,” Flotke said. “Snow White, Cinderella – they all get really excited. We had one little boy who was afraid of Spider Man, but he’s his favorite, so that’s why it was kind of cute to see.”

She said the children were often in awe, and did not know how to approach the popular Pinkalicious.

She said Rotary members played a pirate and Flat Stanley, who both read stories to the children, and about 30 DYPAC children and alumnus adults portrayed the rest of the storybook characters, including Captain Underpants, who also read to the children.

Pinkalicious, played by DYPAC alumnus Holly Eggleston of Trenton, said she enjoys reading as an adult, but did not read much as a child, and thinks it is great that events like this encourage children to read.

At the event Eggleston signed autographs and handed out character stickers to children.

Dressed as Princess Tiana in a long yellow dress, Ciara Woods, 16, a DYPAC member and a junior at Wyandotte Roosevelt High School, said she enjoys how much the children love even the event’s little details.

“It’s just amazing because they love everything here,” Woods said. “It feels good for me to be able to do this, just to have an opportunity to see them be happy, and just enjoy everything here.”

Being in character and interacting with children as Captain Underpants and reading to them is an amazing experience, Zack Yaeger, 16, a DYPAC member and junior at Carlson High School in Gibraltar said.

Yaeger said while the children are a little overwhelmed at first, they are glad to see all of the book characters and are excited to interact with them.

He said he loved the Captain Underpants books as a child, and finds playing the character exciting.

Elena Deller of Dearborn, who brought her own four children and two of their cousins to the event, said they loved meeting the characters, and her son, Sterling, 5, was very excited to meet Spiderman.

Hatty, as Flat Stanley, was equally pleased to interact with the children, and said “Characters Alive” is the most awesome event he has volunteered at as a Rotarian.