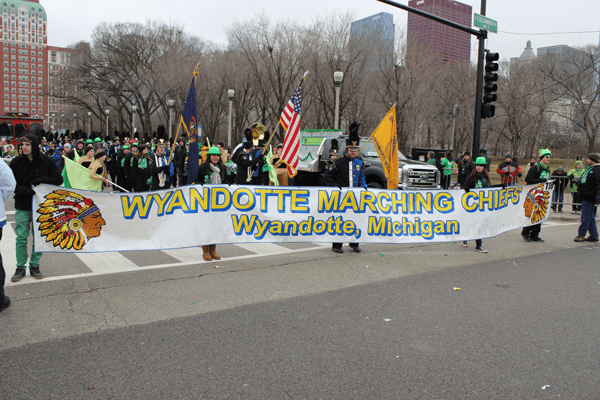 While the marching band waited in the 31 degrees Fahrenheit temperature in the outdoor staging area for the parade to start, they joked around and made music to boost morale and keep warm.

Senior Davey Gutenschwager, 17, said the drum-line found it challenging to keep their hands warm while waiting.

“Throughout the four hours that we were waiting there were a number of times where we’d get our drums on and spend twenty to thirty minutes playing different songs and warm-ups,” Gutenschwager said. “Then we’d just keep our hands in our uniforms to keep them warm for like half an hour and then back to playing just to keep the blood flowing.”

He said other waiting parade participants appreciated their cadences.

“Whenever we’d play our cadences you’d see them kind of grooving and shaking and dancing,” Gutenschwager said. “There were two guys that actually ran from down a block away just to hear us, and by the time they got there we had finished, so… we played the song again… and they were just ecstatic.”

Student teacher John Brunetto found it tough to keep the students motivated and excited while they were waiting in the cold for the parade to start.

“The question ‘How much longer, how much longer?’ kept coming up,” Brunetto said. “We didn’t have the answer, but we were on guard, ready to go at any time and just keeping spirits up and warming up and trying our best to look to that finish line.”

He said the band members could hear the loud, enthusiastic crowds while they waited to march in the parade and that helped keep them motivated while standing in the cold.

The band played the Galway Piper, a piece with traditional Irish themes in it as they marched along the three-block, 20-minute long parade route.

“It was the same as if we were playing in Wyandotte,” he said. “When we did the actual parade part they were screaming and dancing… They were very enthusiastic.”

Gutenschwager was thrilled to play a cadence he wrote for the drum-line this year along the parade route.

“For me that was probably the highlight because I’ve always dreamed of writing something our drum-line would play, and finally my senior year I made it happen with one of my last marching band performances,” Gutenschwager said.

Junior Josh Haggerty, 16, a trumpeter, said being in the Chicago St. Patrick’s Day Parade is a marching band highlight for him, almost as exciting as marching onto Detroit’s Ford Field last Thanksgiving Day to perform with Kid Rock during the Detroit Lions nationally televised halftime show.

Instrumental music director Mark D’Angelo said the band was unit 116, toward the back of the parade. He said there were thousands of people watching the parade all dressed in green and in a festive mood along the three-city block route.

“I think the kids were thrilled that after waiting so long the parade was so short,” D’Angelo said.

On March 15, the 89 band members and ten chaperones visited the Chicago Museum of Science and Industry.

D’Angelo, who has been at Roosevelt since 2001, said he tries to plan a trip for the band every two years, at destinations the community will recognize and support their fundraising efforts.

Past trips included Mackinac Island in 2007 for a Memorial Day Parade; Washington, D.C. for the Presidential Inaugural Parade in 2009; and in 2011, the 100th anniversary of the Indianapolis 500 at the Indianapolis Motor Speedway.

Gutenschwager said he thought the Chicago trip this year was a neat experience because it combined two of his favorite things: playing drums and performing in a marching band, and travelling to big cities.

Haggerty said the Chicago adventure was one of the quickest-feeling trips he has taken in a while.

“We just did so much and slammed it all into three days and two nights,” Haggerty said. “I definitely had a great time… there wasn’t a dull moment.”