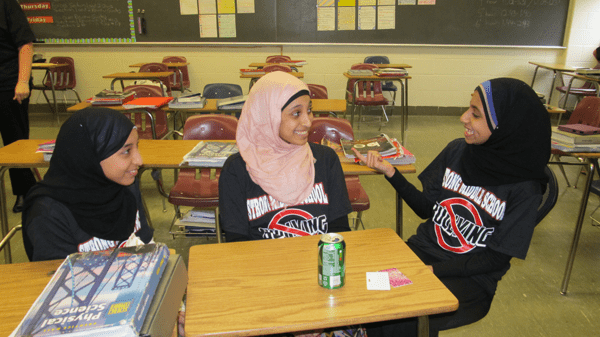 The program may have prevented at least one student at Strong from choosing to end his life, said SMS social worker Tonya Kujat.

During the second year of Bully Busters, she said a new student, a repeated bullying victim, would not admit to the harassment that other students were reporting happened to the boy through the feedback forms. She finally brought together a meeting of students willing to support him and convinced him to open up.

“I had all the Bully Buster kids come in with him and they were like, ‘We are here to help you, we care about you, we’ll stick up for you, we’re in all your classes, please, you have to tell,’” Kujat said. “So finally he did, and he even admitted that he was going to kill himself, and because of the Bully Buster program he didn’t.”

She said she always shares that story with students when she introduces the Bully Buster program.

“I always tell the kids when they come into the Bully Buster program that they’re one person, but you can change the life of someone in a heartbeat just by not giving up and sticking up for them,” Kujat said.

Bully Busters, their own creation, began three years ago when a seventh-grade science teacher was devastated upon hearing about the suicide of a former student.

Kujat said she spent the day in the teacher’s classroom encouraging students to open up about the prevalence of bullying at Strong, which she knew was already creating a significant amount of problems at the school.

Kujat discovered that bullying was more prevalent than she and other staff members imagined, but that students did not want to tell on their classmates.

By encouraging students to stop being passive observers, called bystanders, and by putting blank reporting forms in each classroom, they began to encourage students to become proactive about changing the culture of their school.

Blue forms give students a way to report physical threats or actions to the main office immediately for staff to respond. Students use white reporting forms to report verbal or cyber-bullying behavior, which they deposit in locked boxes, one for each grade, in the school office. Staff members check the locked boxes at least once a day.

Parents and students sign a Positive Behavior Support agreement at the beginning of each school year, which defines expected behavior, the consequences of bullying and parenting tips.

She said initial verbal intervention often eliminates bullying behavior in half of all students. She said other bullies are often themselves victims of bullying or may be depressed and want to be in a control position after having felt powerless in the past.

Strong has support groups for both victims and bullies that helps empower students and end negative behaviors.

The school also has obtained grant funding to bring outside speakers and programs into the school to reinforce the Bully Buster message.

Kujat said surveys show that 90 percent of the school’s students now feel safer in the classroom. She said her next step is to find a way to address subtler passive-aggressive behavior, like cyber bullying – texting and hurtful social media and texting messages – and “mean girl” behavior.

At a lunchtime Bully Busters meeting April 9, seventh-grader Haileh Salem, 12, said that some students bully students over the computer in a way they would never do face-to-face.

“I think the reason that bullies cyber bully is that some bullies don’t have the courage to go up to someone and just say stuff to them, and they just feel like no one would say stuff to them if they just did it on the computer or cell phone,” Salem said. “They don’t have to see the expression on their face.”

Seventh-grade teacher Susanne Gawlick agreed that students find it easier to bully on-line or through a text message than face-to-face.

“There’s no contact,” Gawlick said. “You don’t see the person’s expression or how you’re affecting them.”

Seventh-grader Emily Shelton, 13, said that if families monitor students’ social media sites they might not bully on them, but might still bully at school or outside of school.

“(Bullies) have things going on in their life and so they try to take it out on other people, to make themselves feel better,” Shelton said.

Seventh-grader Sarah Yahia, 12, agreed that bullies often have problems at home, and their victims do not always have the coping skills to stand up to bullies. Students need to be more than bystanders and help victims, she said, since the perpetrators often do not bully in front of teachers but in other parts of the school.

Yahia said she is glad to have a program like Bully Busters as a way to help bullied classmates.

“You can’t just let somebody get bullied and not defend them,” Yahia said. “We’re all brothers and sisters. We are all community. We help each other.”

Eighth-grader Rose Offord, 14, agreed, and was glad that Bully Busters provided a structure to help her and others end bullying of a classmate with special needs.

Offord said that she has heard that there is less bullying at Melvindale High School as Strong Middle School graduates maintain the values they learned at the middle school during their high school years.

Yahia added that some bullying occurs by spreading rumors, and that students need to feel empathy for others to prevent more subtle bullying.

“People have hearts – you can help each other,” Yahia said. “Instead of our world having people getting sad and people committing suicide, you can help out actually and really make a difference. Every school should do this program.”