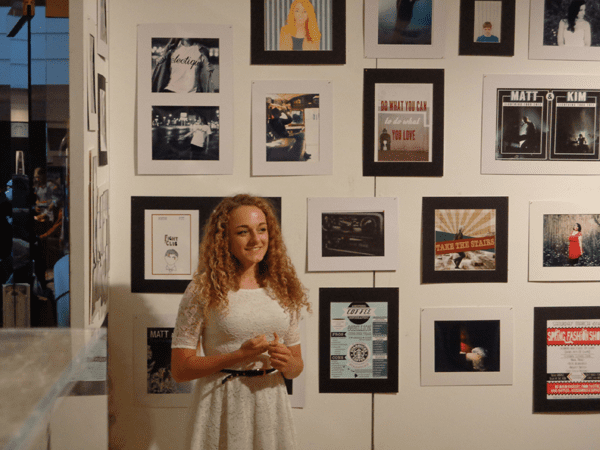 Photo by Bob Oliver
Senior Leah Wendzinski from the Michael Berry Center discusses her artwork and the inspiration behind the pieces in the Padzieski Art Gallery inside the Ford Community & Performing Arts Center at the 2013 Youth in Arts Festival. She was one of four local high school seniors to have their own special exhibit.

The event — the 2013 Youth in Arts Festival held at the Ford Community & Performing Arts Center — showcased the artistic work of students from every school in the DPS system and allowed them to have their work viewed in public.

Sculptures, sketches, photographs, paintings and other pieces of artwork were showcased on display boards, tables and cases throughout the lobby of the Center. There were also works covering the walls of the Padzieski Art Gallery inside the center. Dearborn Community Fund Executive Director EmmaJean Woodyard said that with the inclusion of the musicians who performed at the event there would be artwork from more than 400 DPS students at this year’s festival.

DPS Art Resource Teacher/Leader Katie Blair gave the opening remarks to the festival. She described the process of choosing the artwork on display.

“Each year art teachers have the daunting task of choosing between 10 and 20 student creations for this show, depending on the size of the school,” Blair said. “This exhibit is a representation of the tremendous talent here in Dearborn.”

Awards were presented to students whose artwork was chosen to represent Dearborn in the annual Dearborn Arts Show later this year. They were given to both two- and three- dimensional works and divided into kindergarten to second-grade, third- to fifth-grade, sixth- to eighth-grade, ninth- and 10th-grade, and 11th- and 12th-grade groupings. There were also awards given for special needs student artists.

Nunez was one of the four Senior Artists this year. Each of the seniors had an exhibit dedicated to their work in the Padzieski Gallery. They were chosen by their art teachers by the quality of their work and the growth they showed during their years in their high school art programs.

The other three seniors were Scott Bankey from Edsel Ford High School, Ali Mohsen from Fordson High School and Leah Wendzinski from the Michael Berry Center. All four seniors gave descriptions of their art and answered questions later in the show.

The exhibit for Nunez included sculptures, paintings, sketches, and a T-shirt he had designed.

Also announced at the festival was the winner of the Superintendent’s Award which allows one students work to be framed and hung in DPS Supt. Brian Whiston’s office for the next year. Whiston selected an untitled work from Fordson 11th grade student Nabihah Abdulmalik as this years winner.

There also were several musical performances to entertain visitors. A Dearborn Youth Symphony ensemble opened the musical show. They were followed by choral and instrumental performances from several area school groups including the Fordson High School Vocal Ensemble and Bryant Middle School Orchestra.

Woodyard said she hoped the festival would bring attention to the quality and creativity of DPS students, and that visitors to the festival would enjoy seeing how many Dearborn students are involved with the arts and how talented they are.