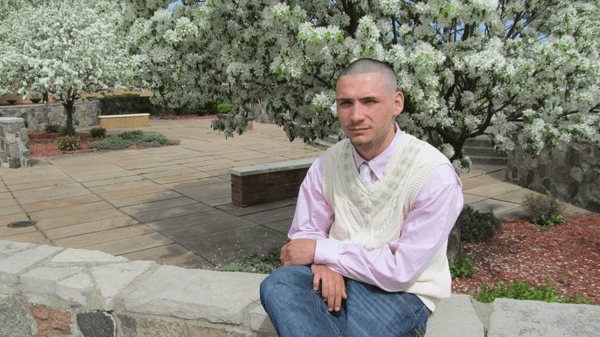 Photo by Sue Suchyta
Lincoln Park senior Jessie Adams, 18, overcame the death of both parents and the consequences of poor choices he made in years past to graduate with strong grades and plans to attend college in the fall.

By SUE SUCHYTA
Times-Herald Newspapers
LINCOLN PARK – After losing both of his parents to drug overdoses, Lincoln Park High School senior Jessie Adams, 18, knew he did not want to live the kind of life they did.

“I know that in order for me to want children, I can’t do the things my parents did,” Adams said. “I can’t put my children through the things I have been through.”

Adams said he grew up in a family where criminal activities and selling drugs were commonplace, and from age 11 to 14, his mother’s addiction to street drugs prompted authorities to place him in foster care.

The summer he was 14, he said he returned home, and his father died of an overdose while Adams tried to revive him.

He said his frustration after his father’s death made him angry, and he sold drugs and committed break-ins.

He said he also quit school during his junior year to keep an eye on his mother to prevent her from overdosing on drugs.

He said his illegal activities, however, resulted in his placement in a juvenile facility, and about a month after his incarceration began his mother died from an overdose.

He said he realized then that he had some difficult choices to make about his life.

“I can’t do the things my parents did,” Adams said. “Having got locked up, I realized it was not what I wanted.”

He said he knew change would be difficult, and credits adult mentors with helping him set goals and find direction for his life. He said he always liked school and did well there, so he realized that he was ready to use his assets to make a better life for himself.

“I realized it was going to be tough, but I also had the courage and the strength and the faith to do it,” Adams said. “So when I came home (to live with his maternal grandmother) that was my main focus.”

Adams also realized that the life of a street criminal was limited.

“I realized that if you want to live in the streets, you want to be the dope man, you want to have the money like that, it won’t last forever,” Adams said. “You’ve got it for five years. All the people I know who did things like that are (now) broke, on Social Security (disability), so if I want to make money, let me make it the right way.”

Adams said he draws inspiration from an Old Testament biblical quote from Proverbs 16:16 as well: “How much better to get wisdom than gold, and good judgment than silver!”

He said an uncle currently in prison talked to him and inspired him to stay in school.

After Adams graduates from high school in June, he said he wants to study business in college. He would like to get an accounting degree as an undergraduate student, followed by a master’s degree in business economics and a doctorate in political science.

Henry Ford Community College accepted him for the fall semester, and he is looking at Wayne State University and Western Michigan University, which has had a foster youth and higher education initiative in place since 2008 with the Michigan Campus Compact and the Michigan Department of Human Services.

The WMU program tries to support college students who age out of foster care between the ages of 18 and 20 who have specialized legal, medical, counseling and financial needs make the transition to adulthood through higher education.

Adams said several people have inspired him to graduate from high school and start college.

He said that when he was in the juvenile facility, he drew inspiration from advocate Marvin Tobert, who he said listened to him and helped him accept his good qualities, and from Kessendra Kite, who he said helped him by being a confidante.

He said he is working on his long term goals by creating short term goals to reach them, like the steps on a ladder.

Adams said he has learned the power of prayer, patience and not jumping to conclusions.

“I am patient enough to know that I need (more) patience,” he joked.

Adams, who lives with his maternal grandmother in Lincoln Park, has 15- and 26-year-old sisters.

Lincoln Park High School counselor Brent Tucker said Adams earned a 3.8 grade point average last semester, an above average score on the ACT and has a strong desire to go to college.

Tucker said Adams is an overall nice student who has overcome a lot in his lifetime, and he would like to see him succeed.

“He’s a genuine kid who comes across with a positive attitude who puts a smile on your face,” Tucker said.