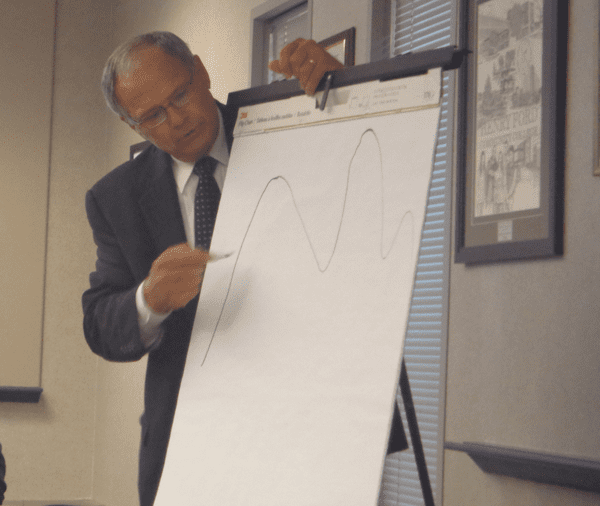 Photo by Bob Oliver
Henry Ford Community College President Stan Jensen draws a graph to show the Board of Trustees where he believes the operational expenses should be for the college to thrive despite the fluctuations in student numbers throughout the academic year. The May 20 trustee meeting was his first as president.

By BOB OLIVER
Times-Herald Newspapers
DEARBORN — Henry Ford Community College will experience an economic shortfall for the next fiscal year, but the administration is working to crunch numbers and find ways to improve the situation.

At the May 20 Board of Trustees meeting HFCC Vice President/Controller of Business and Auxiliary Services Marge Swan told the board that the preliminary findings of the colleges finances show a $16.6 million shortfall for the 2013-14 fiscal year.

Swan has previously said that the expenses for the college will have the board dipping into its fund balance, which is expected to drop from $7.9 million to $1.6.

The projected shortfall Swan presented included prospective savings the college could make versus the additional revenue it could bring in throughout the year by making adjustments to current operations. These changes could allow the college to account for about $10 million of the shortfall.

The areas targeted for savings include program costs and the adjusted costs for lower enrollment. Combined with savings from non-teaching assignments, reduced purchase services, assigning costs to grants and a re-alignment of the Perkins loan match the college may be able to lower their expenditures by $5.29 million. The Perkins loan is a low-interest student loan available to needy students. Swan said that HFCC wants to re-align the match the college offers to students receiving the loan from cash to in-kind work.

To raise more revenue the college is exploring a possible $5-per-credit-hour increase in tuition, an increase in contact hour fees for classes that have more classroom time then they are billed for and a reduction in the uncollectible tuition and fees from students. These steps are projected to raise the revenue of the college by $4.9 million.

The total amount of savings and prospective new revenue together would equal $10.17 million but would still leave a nearly $6.5 million shortfall for the college.

Additional revenue sources discussed at the meeting were property taxes, state aid and enrollment. Swan said property taxes are likely to stay the same or slightly increase while state aid appropriation may be increased by $300,000 after the state approves its final budget in June.

Both of these are revenue sources for the college along with enrollment, which is currently down about 25 percent for the spring semester. The enrollment drop means approximately $1 million less in revenue.

One of the reasons for the shortfall is the rising amount of uncollectible tuition and fees that the college has received. If a student receives financial aid and then doesn’t attend classes, the college must repay the money to the government. It is expected that HFCC will have just over $12 million in these uncollectibles next year.

The board received that number of uncollectible money from the school’s accountants, Plante Moran, earlier this year. The board then hired the accounting firm Grant Thornton LLP in April to review the situation and identify the root causes of the increase and how the college could limit them in the future.

HFCC Board Treasurer James Schoolmaster said he had received the preliminary report from Grant Thornton and that it verified the $12.1 million projection.

Swan said the college is exploring ways to combat this issue. She added that the college is implementing new procedures that will help “ensure students have a means to pay for classes before registering.”

The board also approved the borrowing of $5 million to handle any cash requirements the college may face during the summer. The approval will allow the college to issue tax anticipation notes to provide the needed cash. The college pledged future property tax revenue for repayment of the notes.

HFCC President Stan Jensen said the college would have to work hard to find the money for the $6.5 million shortfall.
“We can only cut paper, pencils and copy machines so much and then the matter gets worse,” Jensen said. “We have to bear down and work through our budget and make tough choices.”

Board Trustee Joseph Guido said he was concerned with the idea of raising tuition costs. The college raised the tuition by $7 per credit hour before the spring semester and is looking into an additional $5-per-credit-hour charge which would begin for the 2014 winter semester.

“I’d like to solve this problem without raising tuition,” Guido said. “We need to be accessible to our community. It’s hard for kids these days to afford to go to even the community college.”

Swan and Schoolmaster said that an updated budget report should be available at the June 17 board meeting. The finalized 2013-14 budget also is expected to be turned in next month.