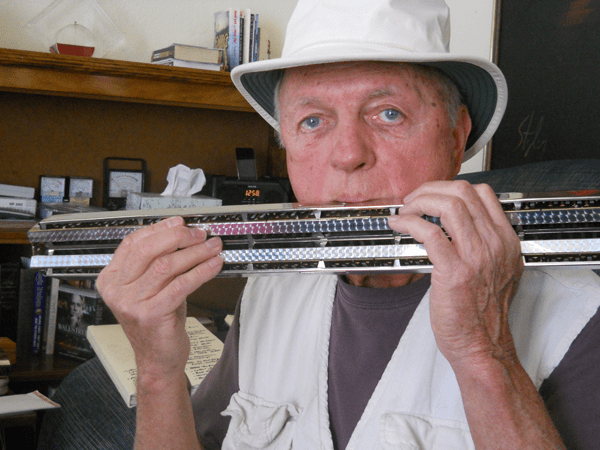 By DENETTE WATSON
Times-Herald Newspapers
DEARBORN — On a small table in his foyer, Richard Harris proudly displays five of the 50 harmonicas he owns and keeps a sixth harmonica in his vest pocket.

For Harris, 75, each harmonica not only has its own unique key but they also help tell the unique story of his 50-year involvement with the Society for the Preservation and Advancement of the Harmonica.

Harris founded SPAH in Dearborn in 1963. The organization — celebrating its 50th anniversary this year — focuses on promoting, cultivating and advancing the harmonica as a respected musical instrument. Its primary purposes are to educate people about the heritage of harmonica music, harmonica players and learning to play the
harmonica.

SPAH encourages and supports the formation of harmonica clubs and provides its members with a forum to network with other harmonica players and enthusiasts. Members also gather for an annual international convention that features seminars, entertainment and camaraderie.

For the group’s 50th anniversary Harris has prepared a PowerPoint presentation and brief lecture on the history of SPAH, as well as demonstrations of the various harmonicas and how they work in a group. He intends to hold the lectures around Dearborn.

Harris received his first harmonica as a gift from his mother when he was a child and learned to play it by ear.

In December of 1962, shortly after Harris graduated from Wayne State University, he was contacted by the late Earl Collins about attending a harmonica meeting at the Ford Central Office Building. Collins learned of Harris’ interest in the harmonica from a mutual associate, the late Gordon Mitchell a professional harmonica player.

More than 100 harmonica players attended the meeting. That number came as a surprise to Harris.

“I’d never seen so many harmonica players,” said Harris. “After that, we got together and jammed at harmonica sessions.”

The three men effectively co-founded SPAH and began the Dearborn Chapter of SPAH. Shortly after the Lincoln Park Chapter and the Canadian branch – CanSPAH were created.

Harris, along with other SPAH members, has played in several events and venues throughout Michigan and across the country. Such events include the unveiling of the Henry Ford statue at the Henry Ford Centennial Library in 1975, Dearborn Homecomings, variety shows and performances with the Dearborn and Allen Park symphony orchestras.

Throughout his 50-year involvement, Harris has filled many roles as a member of SPAH. From 1988 to 1993 he served as the first desktop publishing editor of the SPAH newsletter “Harmonica Happenings.”

In 1990, he was awarded the Bernie Bray Harmonica Player of the Year Award, presented to those who not only play the harmonica but who contribute time to serving the organization.

“Receiving the player of the year award was quite an honor,” said Harris.

The award was posthumously named after Canadian professional harmonica player and first SPAH player of the year award recipient Bernie Bray. Bray contributed much of his time and talents to SPAH.

After 50 years as a co-founder and member, Harris takes away an exceptional amount of pleasure and fond memories from his time with SPAH. It provided him with the opportunity to meet professional musicians from all walks of life and to perform with and for his peers.

Some of his most memorable moments include the day his trio spent with world famous violinist Dave Rubinoff, as well as several performances at SPAH conventions and radio and television appearances.

“As a boy I would hear the name (Rubinoff),” said Harris. “Jack Benny had Rubinoff on his show. I never thought I would be meeting the Dave Rubinoff. Meeting someone world-famous like that was a real highlight.”

Harris credits SPAH as being the oldest ongoing harmonica club in the world and he is proud of being a part of a club that wasn’t expected to last more than two years.

In addition to SPAH, Harris also is a member of the Detroit Stereographic Society, a club for 3D enthusiasts. He also does harmonica performances as a member of the duo Reeds and Keys. Harris — the reed — is joined by pianist Alexandra Lypeckyj —the keys.

To learn more about SPAH or to become a member go to www.spah.org.