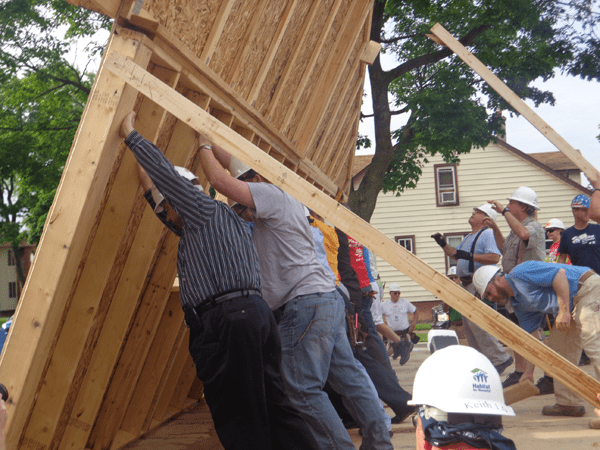 Photo by Bob Oliver
A wall for the first of 12 Habitat for Humanity houses in Dearborn is raised on May 29. Participating in the ceremony were Dearborn Mayor John O’Reilly Jr. (left) and several Habitat volunteers and directors. The house — at 7607 Neckel — is one of six that will be built on that street.

By BOB OLIVER
Times-Herald Newspapers
DEARBORN — The first of 12 new houses being constructed by Habitat for Humanity had its walls raised by city officials, Habitat volunteers and community members May 29.

The house, at 7607 Neckel, is one of two under construction on Neckel. The two are the first of four to be built on that street, with six more to be built of Hartwell later this year.

Detroit Habitat for Humanity Executive Director Vincent Tilford said that although Habitat has been working in Detroit for more than 20 years, this is the first construction in Dearborn. He added that the project has been in the works for the last few years.

“For about the last three years we’ve been meeting with the city of Dearborn,” Tilford said. “We knew that we wanted to do something together.”

Tilford was joined by Wayne County Executive Robert Ficano, Mayor John O’Reilly Jr. and Arab Community Center for Economic and Social Services Director of Social Services and Special Projects Brigitte Fawaz-Anouti in speaking about the origins of the houses being built and how they will impact the community.

O’Reilly said the city has been looking to get involved in a house-building project for some time and was very excited about the new houses being built. He also participated in the wall-raising and reminisced about the area. He said that the house that he and his father before him were raised in was only a couple lots down the street from the construction site.

“For me this is very personal,” O’Reilly said. “My family has been in this neighborhood for many decades.”

He added that the houses were good for the whole community.

“This is going to give some people who have been through some very difficult times a really nice home they can own, live in, raise their families in and enjoy life in this neighborhood,” O’Reilly said.

Algina Johnson also participated in the wall-raising. She was recently approved for a Habitat house and said that she was elated that she and her family were chosen for a future house. After the raising she began her first day as a volunteer on the worksite.

“I’ve never done this type of work before, but it’s fun,” Johnson said. “It’s great to be able to build someone a home and it’s perfect to have the community coming together to help.”

Detroit Habitat for Humanity Construction Manager Dan Garan said working in Dearborn has been very good so far and that the response from the community has been great.

“The turnout by the volunteers has been terrific,” Garan said. “We’ve gotten a great reception by the city as well. It’s been really nice.”

Garan added that the side walls were going to be built on the house at 7607 Neckel while a crew did the brick work to the second house down the street.

The houses are ranch style, which is unique to the area, and are being built to meet city ordinances in place for new houses. They will have four bedrooms, three-quarter bathrooms in the basement and two-car garages. They also will be built to be energy efficient.

O’Reilly said the city is paying for brick facing on the houses to add to their appeal and value.

He added that the lots that the houses are being built on also came from the city, which has purchased 214 sub-standard lots since 2007. The city tore down the houses that were beyond repair and has sold many lots to neighboring properties at discounted rates. Other lots were kept or combined and held by the city.

The Habitat houses are being built as part of a project that hopes to revitalize Dearborn neighborhoods through the new home construction, and preference for the sale of the houses will be given to working Wayne County families that include veterans and victims of domestic abuse, though the applications are open to everyone.

Construction of all 12 houses is expected to be completed in about one year.