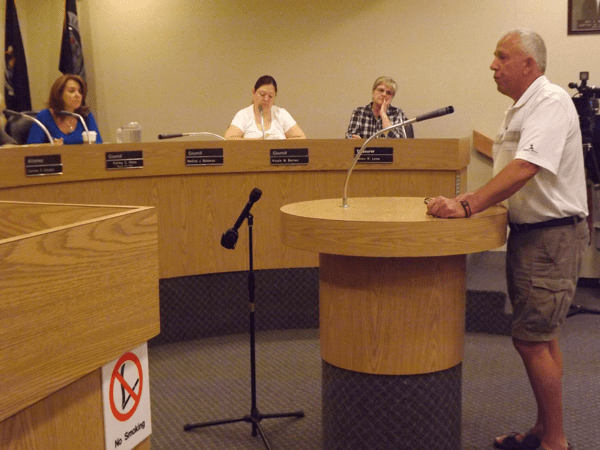 Photo by of Gabriel Goodwin
Joe Flexa (right) speaks to the City Council about the experiences he had with previous failed attempts to consolidate the fire departments within the Downriver area. Flexa, a Melvindale resident, has 29 years of fire experience with the Trenton Fire Department. He supported the consolidation and said the council has an opportunity to get the best of both worlds: save money and really improve response time. He said he knows the decision would be hard, but both cities have made the rough and necessary compromises to get this far.

By GABRIEL GOODWIN
Sunday Times Newspapers
MELVINDALE — Residents packed the council chambers Wednesday to show their support for the fire department and waited to hear the eventual acceptance of the fire consolidation with Dearborn.

Before the vote, citizens addressed a few concerns, but Mayor Stacy Striz assured residents the merger would allow the fire department to operate at the same level or higher than the current standard provided to the residents.

Striz and Councilors Kalley Hess, Dave Cybulski and Carl Louvet voted for the merger and Councilors Wheeler Marsee and Nicole Barnes voted against. Councilor Medina Balderas was not present at the meeting.

Most residents supported the consolidation and many of the people in the audience stood and cheered after the decision to adopt the agreement between the cities came.

Fire Chief Steven Densmore said he expected the vote to go the way it did. Both he and Dearborn Fire Chief Joseph Murray are optimistic about the consolidation being complete by the Sept. 1 contract date.

Densmore said this consolidation has added an aspect of stability to the department that might not have been there if it would have been struck down. He said he could look at his 13 firefighters and assure them without a doubt they will have a job.

“We got the point across that we can help eliminate our deficit,” he said. “We got connected with a great community to keep our service at we know and love and the citizens deserve and pay for. That’s huge in this day and age. It’s also a big sense of relief.”

The consolidation provides an increase in staffing at the Melvindale firehouse — the cities agreed to allow a five-person minimum in the station, instead of four firefighters the city currently staffs — and provides the necessary upgrades to all equipment. In the first year, the city will save about $500,000 over current operational costs.

Murray said this consolidation will allow for both cities to benefit from each other and improve their response times. Dearborn is gaining confined space rescue members and Melvindale gets additional staff support, he said, along with operational and financial benefits for both cities.

“When you have two cities that can improve their services, in a way they otherwise wouldn’t have been able to do,” Murray said, “that’s just a great indicator of how successful this merger is going to be.”

Murray will be the head of the consolidated fire department and Densmore will become Dearborn’s deputy fire chief.

The departments still have many things to take into account before the consolidation is finalized, Murray said. They will have to consolidate their standard operating procedures, obtain necessary equipment, and complete joint training sessions.

The fire chiefs will meet every Thursday until they sort out the details. Their first meeting was Thursday to set up a timeline to complete the necessary steps. Murray said the first order of business is to consolidate the emergency operations of the two departments by the end of the summer.

Murray said the separate departments already operate in a similar manner but they will work closely to eliminate any differences, then combine and implement the best practices.

In the Thursday meeting, Densmore and Murray confirmed that all five fire stations will remain open and a closure, in either city, was never considered. The cities will continue with their current mutual aid agreements.

Dearborn proposed the consolidation be effective immediately, but Melvindale council rejected the proposal on the advice of Melvindale Fire Lt. Dennis Schultz, president of the International Association of Fire Fighters Local 1728.

He said the pension company had issues with the consolidation and that it’s a possibility they could see less benefits. Schultz is one of the firefighters who could be affected by the pension negotiations, but said he was in full support of the merger.

“The firefighters union does endorse this move,” he said. “We are actually pushing it for many reasons. Its a great deal for everybody.”

As part of the agreement, the seven firefighters with the highest seniority would stay in Melvindale’s pension system, while the other six would be absorbed into Dearborn’s system.