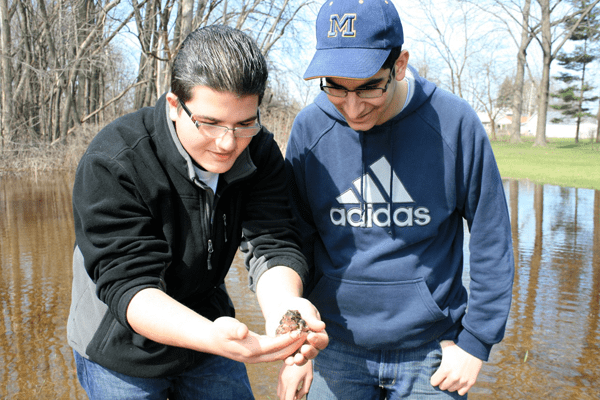 Photo courtesy of Diana Johns
Crestwood High School seniors Ahmad Awada (left) and Hussein Makki inspect an American toad from a vernal pool in the Ecorse Creek Watershed. The students conducted research on the pool and the organisms that live in it and presented their findings at the NASA and Global Learning and Observation to Benefit the Environment Student Research Exhibition in August. They were awarded first place in the competition for their work.

By BOB OLIVER
Times-Herald Newspapers
HEIGHTS – Crestwood High School seniors Ahmad Awada and Hussein Makki were excited to be invited to present their research on a local environmental issue at an international science competition.

That excitement skyrocketed when they discovered that they won.

“They announced the third place finalist and we thought, ‘Well, it’s too bad we didn’t finish,’” Awada said. “Then when they said that the winner was a Michigan high school and announced us we couldn’t believe it.”

Awada and Makki were recognized at the NASA and the Global Learning and Observation to Benefit the Environment Student Research Exhibition in August. The exhibition took place at the University of Maryland as part of the 17th annual GLOBE partner meeting.

The CHS students presented their original research on a local vernal pool and how precipitation and weather changes affected American toads that used the pool as their home.

A vernal pool is a temporary wetland lacking fish that is often used by amphibians and invertebrates for feeding and breeding activities early in the spring. The water collected in them only lasts a short time before evaporating, which can wipe out all of the organisms that used it as a habitat.

Awada and Makki used a vernal pool in the Ecorse Creek Watershed to conduct their research. Awada said that pool was the only natural vernal pool identified as being part of that watershed and in Dearborn Heights.

After completing their research, the students created a video and submitted it to GLOBE in May. They later received their invitation to the exhibition.

CHS Science teacher Diana Johns, who instructed Awada and Makki in AP Environmental Science during their sophomore year, introduced them to the vernal pool and accompanied them to Maryland for the convention.

She said she was impressed with the work of her students.

“These guys competed with kids from all over the world,” Johns said. “They had to stand up and give a presentation and field questions in front of a group of scientists and educators from around the world.”

She added that it also was special for the students because they were able to interact with science professionals, meet international peers and visit the NASA’s Goddard Space Flight Center, where they were able to watch satellites being built.

Makki said they hope to present their findings to the city and tell them about the importance of protecting the area, which was the former location of an incinerator until 2003. The city bought the property in 2009 and has been looking into selling it.

“We would like the city and any prospective buyer of the land to take the aesthetic and biological values of this wetland into consideration before planning any development of the area,” Makki said.