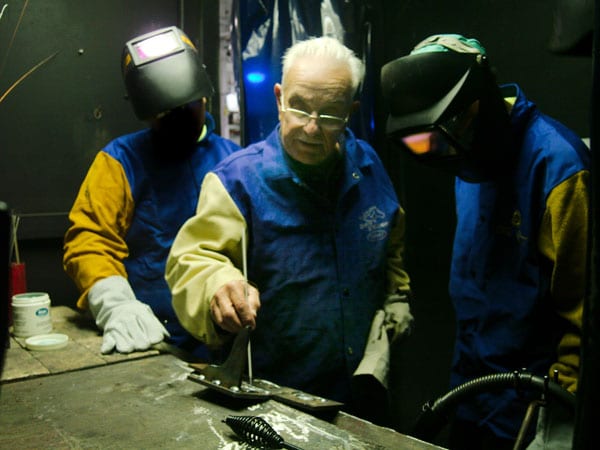 “When I am in class I have no thought of (dialysis),” Hribar said. “When you are at home, you dwell.”

Hribar, a Dearborn native and a Fordson High School graduate now living in Allen Park, spent 35 years working at the Ford Rouge plant. He retired in June 2000, and received an offer in September 2000 to teach welding to apprentices and other United Auto Worker employees at the UAW Ford Technical Training Center in Lincoln Park.

Hribar said living moderately, watching what he eats and following the directions of the medical personnel at DaVita Dialysis in Dearborn help him feel better.

He chose the Dearborn location because he can teach until 2 p.m. and then go to DaVita and have a full dialysis treatment at 2:15 p.m. On days when he does not teach, he goes in earlier for dialysis if equipment is available.

Hribar said he discovered that developing a positive attitude was an important aspect of his treatment as well.

“I have been a pessimist all my life,” Hribar said. “But this has taught me patience. It taught me gratitude and how important life is to me, (especially) with my grandkids.

“You know, you can go at any time. But you have to have a little better attitude. If you are going to mope around, you are not going to last long. I do not plan on doing that.”

He said polycystic kidney disease, which his mother also had, is a slow, progressive condition, and he has nearly completed the steps and tests he needs to gain placement on a kidney transplant list. Sharon Hribar, his wife of 47 years, has offered him one of her kidneys, but he said he does not want her to risk the transplant surgery.

“If something happened to her — and things happen on an operating table that you cannot foreseem — it would just obliterate me,” Hribar said.

He credits the people he works with at the UAW Ford Technical Training Center for being supportive of him. He said being able to continue teaching lowers his blood pressure.

He added that keeping busy keeps his mind off his worries.

When he is teaching, it is a combination of classroom work and field work in a welding shop.

While he originally taught welding to skilled trades workers, he now teaches participants who work in the plant as part of a UAW and Ford initiative to provide additional skills to their hourly workforce in what he describes as a very intense training program.

He said that while he does have his “down” days, he has more “up” days than he did before he began treatment, which is three times a week for a three-hour session, as dialysis replaces kidney function by removing excess fluids and toxins from the body.

“When I first went on (dialysis) I was devastated,” Hribar said. “As soon as the doctor told me I had to go on dialysis, I was like, ‘Oh, no,” but you have beautiful people here (at DaVita). This place is really good.”

Justin Forbis in Communications for Team Mercury at DaVita said dialysis is a demanding and taxing process on the body, and while Hribar continues to work it keeps his mind occupied and gives him a sense of self-worth.

“Frankie sees himself as having a disease but won’t allow it to dictate his life, an inspiration that many can draw from,” Forbis said.

Hribar said he sees things through a different perspective now, and if he were to get a kidney from the transplant list, he would travel and play more golf, but he would continue to teach welding.

“I love it,” he said. “You have to love your job. I you are not engrossed with your job and happy with your job, you are miserable and you want to retire, and that is why most people retire – they do not like what they are doing. I do.”

He said that while he would not want to go back to work in a plant setting, he enjoys his work as a trainer.