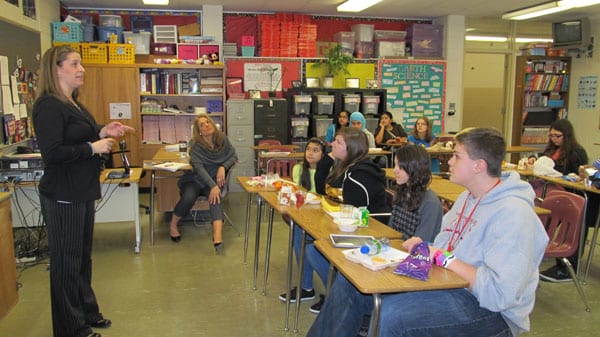 By SUE SUCHYTA
Sunday Times Newspapers
MELVINDALE – As Strong Middle School enters its fourth year with a Bully Buster program, students who learned how to overcome aggression aimed at them are learning how to help their peers.

Teacher and group advisor Susanne Gawlik said this year’s Bully Buster group is the largest and most diverse group yet, which leads to increased openness among students when they meet and gives staff more accurate feedback about student aggression aimed at their peers.

“I think a lot of them are ready to seriously protect a lot of people who were not in good situations and were hurt,” Gawlik said. “I do think they have minimized a lot of the bullying in classrooms and around just by talking, just by the group being big and just targeting the ones who started out being really, really big bullies. We nipped that right when school started.”

She said the school occasionally experiences some name-calling, but it is not nearly as intense as it was last year.

In the past, bullies hurt seventh grader Tuhshaunna Pruitt, 12, of Allen Park. When she joined Bully Busters, aggression against her subsided. She said she then became a lot more aware of the bullying committed against other students, and she learned what she could say to stop a bully’s aggression when it was happening.

“Just knowing that you are helping out someone else, saving someone else’s life, it just makes me smile,” Pruitt said. “When I see someone else getting bullied, I immediately handle (it).”

Pruitt said knowing what to say to a bully is the key to defusing a situation and stopping an incident.

Seventh grader Caitlin Harper, 13, of Allen Park said she was bullied with name-calling in the past, but before she joined Bully Busters she never realized how mean student bullies could be others.

“People don’t know how mean they can get,” Harper said. “When they get to their maximum meanness then it hurts a lot of people, and then people commit suicide and I want to stop that.”

She said she successfully passes on the technique to younger neighbors for whom she tutors and provides childcare.

“If I see people bullying other people I usually tell them to stop, because you don’t know what (the victim) goes through at home,” Barton said. “You don’t know if they are going to go home and do something bad to themselves, so I tell (the bully) to stop and I explain why you shouldn’t do it.”

Barton said he recognizes that bullies were often victims in the past and may feel like they do not fit in, and by being the aggressor they might hope to fit in better themselves.

Bullies may often have problems at home as well, Barton said. He believes that peer interventions can gradually reduce a person’s tendency to bully, and that Strong Middle School is now a more comfortable place for all students.

Seventh grader Entfada Almurisi, 13, of Melvindale, said she is more at ease at Strong than at her previous school, Maples Elementary in Dearborn. She said at her last school bullies targeted her for being oldest in her class and for differences in her clothing and hair.

Almurisi said Bully Busters helps boost her self-confidence and now she sticks up for herself and others. She said students who were consistently bullied and afraid to talk learn to speak up through the support of the group.

Seventh-grader Olivia Suski, 12, of Allen Park, said it is important to speak up whenever you see bullying happen.

“Anybody who is a bystander is almost as bad as the bully,” Suski said.