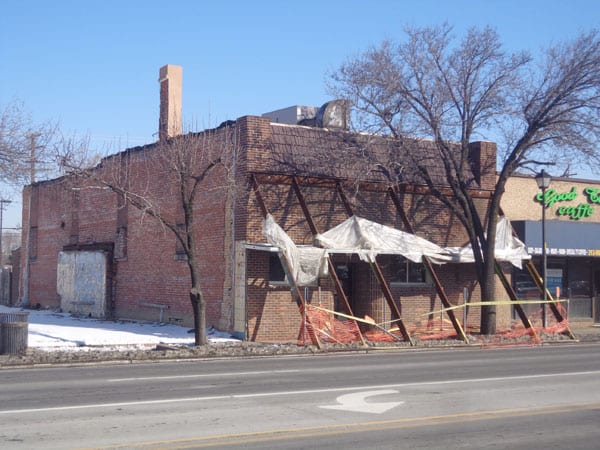 Photo by Bob Oliver
The former Biergarten, 22184 Michigan Ave., is one of two buildings in the city designated for partial or total demolition as part of the new residential and commercial eyesore demolition project that was approved by the Dearborn City Council March 4. Biergarten, which was condemned last fall, is slated to have its front facade torn down and replaced by the owner of the building.

By BOB OLIVER
Times-Herald Newspapers
DEARBORN — Two buildings, one each end of the city, are set to be demolished as the result of a new project authorized by the City Council.

At the March 4 meeting, the council authorized the establishment of a residential and commercial eyesore demolition fund in the amount of $250,000 to handle the project.

Biergarten, 22184 Michigan Ave. in downtown west Dearborn, and a vacant building on Ford Road between Williamson and Middlesex are two buildings that immediately will be affected.

The front facade of Biergarten, which has been held in place for several months by steel beams, must be torn down and replaced by the building’s owner. The building was condemned by the city last September.

The vacant building on Ford has heavy damage to its front after it was struck by a vehicle.

City Councilman David Bazzy said the insurance money was paid to the owner of the building following the crash, but the building was never repaired.

He said he was glad that the city was acting on the property.

“We have to maintain the city’s arsenal of buildings,” Bazzy said.

Council President Susan Dabaja said the council has had a lot of discussion on what to do about property that is not cared for or maintained around the city and whose owners have not responded to attempts made by the city to rectify the situation.

Dabaja said the city is working to remove blight and that it has acquired and demolished more than 200 residential houses it considered substandard since the economic crisis of 2008.

She also said success in the residential sector made the city adapt a similar procedure for commercial property.

“This has helped spur new investments in the city and stabilize our neighborhoods,” Dabaja said.

She said a third property in the Dix-Vernor area was being reviewed by the city but that it was not something that needed to be handled immediately.