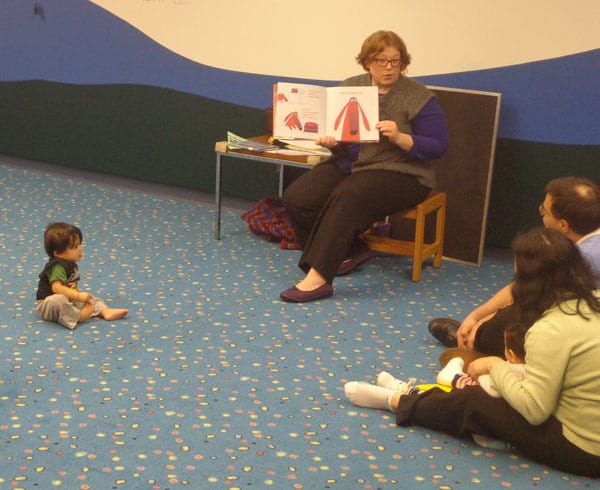 Photo by Bob Oliver
Children sit with their parents and listen as Henry Ford Centennial Librarian Susan Jelic tells stories of dogs, wolves and the wild during “Hear the Call Storytime” March 11.The event was part of the Big Read, the National Endowment for the Arts program which kickedoff last week and is running until May.

By BOB OLIVER
Times-Herald Newspapers
DEARBORN — Residents are “hearing the call” after the Big Read enjoyed it’s first week of events dedicated to trying to bring people together through the reading of Jack London’s classic “The Call of the Wild.”

The program kicked off March 8 at the Anderson Theater and Prechter Promenade inside The Henry Ford, and the Dearborn Public Library also hosted three events at Henry Ford Centennial Library during the first week. A photo competition that runs throughout the program began March 9, followed by a youth storytime reading and a class on survival skills in the wild on March 11 and 13, respectively.

An animal adoption event also was held at the Friends for the Dearborn Animal Shelter Pet Training Center on Saturday, wrapping up the first busy week of the program in Dearborn.

She said there has been a lot of community interest in the program.

“We had 725 people show up for our kickoff event and that’s incredible,” Bartles said. “The community is getting behind it and now people are calling us and asking how to get the Big Read tabloid or how to learn more about the programs we have. I think we’ve got them hooked.”

The tabloid includes the entire text of “The Call of the Wild” and a calendar of all the events associated with the program. It was designed by students from Dearborn Public Schools and is available for free at Dearborn libraries.

The Big Read is a grant program from the National Endowment for the Arts designed to revitalize the role of literature in American culture and to encourage citizens to read for pleasure and enlightenment.

The DPL received a $10,000 grant last year to host a program in the community. It is one of 77 organizations in the country and one of two in the state that received a grant.

Bartles said there are more than 30 activities planned across the city as part of the program, including discussions and lectures, art activities, film screenings and the photo competitions. She said the book also will be integrated into the curriculum at several Dearborn Public Schools.

At the kick off event, The Henry Ford Director of Historical Resources Marilyn Zoidis said literature was not the first thing that came mind when talking about the museum, but that it definitely had a place there.

“Henry Ford had a love of learning and a love of reading, so it is fitting that this wonderful reading program kicks off here at the museum,” Zoitis said.

She said there are several historical buildings in Greenfield Village with literary ties, including Ford’s first schoolhouse and the houses of Noah Webster and Robert Frost.

Mayor John O’Reilly Jr. said many books were discussed and considered as the focus book of the Big Read, but “The Call of the Wild” stood out from the pack.

“It really talks about relationships and how we interact, not only with other humans, but also with the other animals in our environment,” O’Reilly said. “It’s a really interesting and fascinating book because we’re looking at human behavior from an animal’s point of view.”

He said the idea is to encourage interaction between residents and for parents to get their children inspired to read for pleasure.

“The intent of this was to have the community as a whole embrace the project, read the book and to revive our interest in going back to some classic books and discussing them and learning about ourselves from a prospective that someone else has observed,” O’Reilly said. “It’s really important.”

At the kickoff event, O’Reilly also said the brutal winter weather in the area will help readers transport themselves into the story.

“When we selected the book, we didn’t know what kind of winter we were going to have,” O’Reilly said. “If winter had been like last year or the year before we wouldn’t have quite grasped that sense of danger presented in the book. But because of this winter, the book is going to make a lot of sense based on our own experiences.”

More information about the Big Read program and a list of upcoming events are available at www.bigreaddearborn.org or by calling the Dearborn Public Library at 313-943-2330.