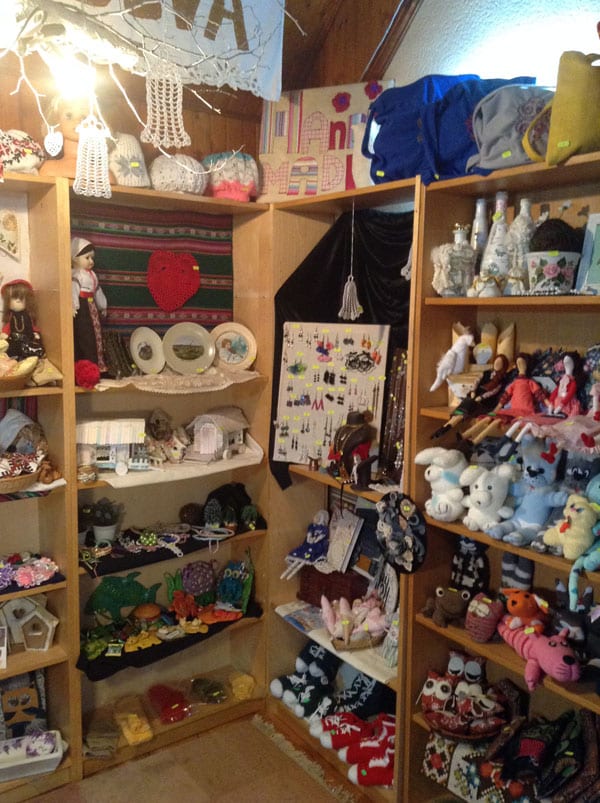 Photo courtesy of Ronaldo Hinojosa
Restoration House Ministries displays and sells artwork created by human trafficking victims to help fund their mission of trying to help the women transition back into society. The artwork and pottery is created by the victims as a form of art therapy to help them deal with the emotions and incidents they experienced while being trafficked. Melvindale Police Cpl. Ronaldo Hinojosa spent a week with the ministry and donated clothes, money, and defense training equipment to Restoration House while on his mission trip.

By GABRIEL GOODWIN
Sunday Times Newspapers
MELVINDALE — Police Cpl. Rolando Hinojosa spent a week in the Republic of Moldova to aid human trafficking victims and at-risk children Feb. 10 to 17 and returned with a “priceless” first impression.

“I will never forget the entire experience,” he said. “To be able to see the look on the faces of the women and children we helped and gave gifts to was priceless. They had a look that combined excitement and gratitude.”

Human trafficking peaked Hinojosa’s interest years ago, he said, so when the opportunity arose to take the week-long mission trip, he jumped at it. He said the reason for the trip was to interact with women who survived the experience and to educate young women and orphaned children about the dangers that lie around them.

Moldova is considered the epicenter of human trafficking, he said, because it has one of the highest rates of human trafficking occurrences in the world and many orphaned children. He said many of the children are considered “social orphans” because the parents emigrate to another country to find work and leave their children behind with friends or neighbors.

Hinojosa volunteered his time with Restoration House Ministries — a group that set up a facility in Chisinau, the capital city of the former Soviet republic, to help recent victims of human trafficking transition back into a normal life — and said all of those interacted with were “surprisingly very receptive to us.” He even recalled one point during the trip when his missionary group spent a night singing and dancing with some of the women at the shelter.

Restoration House does “so much in terms of outreach” for the people of Moldova to help the at-risk children and human trafficking victims, he said. The ministry has comprehensive programs that provide counseling to victims and outreach at orphanages to speak with at-risk children, he said.

There was an art therapy program, he said, that allowed the human trafficking victims to heal through creating paintings or pottery.

Hinojosa said he was “more than impressed” with the ministry workers because they were dedicated to helping these people.

“The workers were so excited to go to Mickey D’s. They told us that it was an experience they don’t get a lot,” he said. “I mean that was the little amount of money they had, but they were dedicated to stopping human trafficking.”

He explained the workers are not paid much to help these people, but “went out of their way” to drop off food and supplies to a woman with HIV who lived in a little village about 90 minutes from Chisinau. The woman and her 18-month-old baby lived in a house that was no larger than 10 feet by 10 feet, he said, with a single light bulb and a wood heater.

Regardless of the size and condition of the house’s exterior, he said the woman was proud of the house and even told them to take their shoes off before they entered. Hinojosa said the interior was very neat and she felt like it was her little corner of the world.

“Kudos to her because she was very proud of what she had,” he said. “The pride she had left me feeling very fortunate for what I have.”

He said the only drawback to the trip was being without his luggage or the gear to train the women in self-defense techniques because of an airline mistake. They were not able to give the women or teenage girls the self-defense training they planned before leaving, Hinjosa said, but they were able to leave them with the equipment and set up a fitness center.

He said he was able to pass along the donated clothes, money, and other supplies that he received prior to leaving for the trip.

“When my luggage finally arrived, it practically went right back on the airplane because it got to me the night before my flight back home,” he said. “Despite that, it was still a great experience for me. I am very glad I went on this trip. It was a rewarding experience and I would go back in a heartbeat if the opportunity presents itself again.”