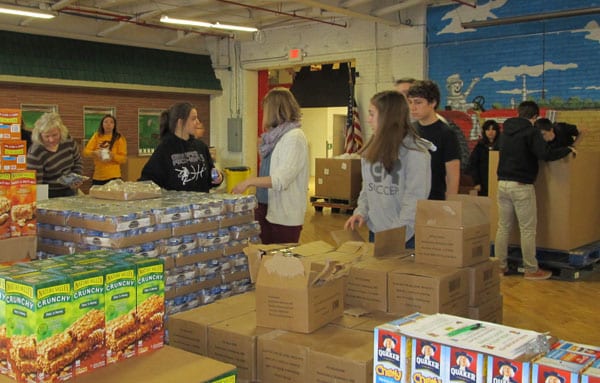 The Gleaners Kids Helping Kids program uses student volunteers to pack non-perishable weekend food supplies for some of the children in southeast Michigan who receive federally funded breakfast and lunch at school during the week, but who may go hungry on weekends.

Gleaners, founded in 1977, with locations in Detroit, Taylor, Pontiac, Howell, and Warren, is one of the oldest and largest food banks in the country. It distributes donated and purchased food to more than 500 soup kitchens, food pantries, homeless shelters, senior homes and other partner agencies that feed hungry people in Wayne, Oakland, Livingston, Monroe and Macomb counties. For more information about Gleaners, go to www.gcfb.org.

Gleaners staff said many of the people they help are the working poor, who do not have enough money left after paying for medicine, rent and other bills to purchase adequate food for their families.

“There is (government) assistance out there, but if you are a working family, then chances are you won’t qualify for that,” Jensen said. “There are a lot of great resources out there, but the numbers (in need) are staggering.”

Jensen said it warms her heart to see how eager the students are to help with the weekend food bag packing.

“We always stress that while money is nice and necessary to do things, your time is really the most valuable thing you can offer other people,” Jensen said. “Gleaners completely depends on volunteers to help pack things.”

Winona Bynum, Gleaners’ dietitian and manager of youth and nutrition programs, said that many of the children who volunteer to pack food bags do not realize that many children in their own community may rely on breakfast and lunch at school, and may miss meals not because of a busy schedule but because there is no food in their home.

“They leave with that and the knowledge that there are things they can do about (food insecurity),” Bynum said.

Anne Schenk, Gleaners’ vice president of advancement, said it is very expensive to move food around, and having 48,000 volunteers a year pack food – many of them children – lets Gleaners use more of its money to feed people.

The need for the weekend food program for children is great, and Schenk said Gleaners has a waiting list of 35 to 40 schools that want to participate in the program when government or private funding becomes available to the food bank.

Schenk said Gleaners purchases food staples in bulk to ensure the items are nutritious and are something children can prepare themselves if they are home alone.

“We are working hard to educate the community that a lot of people have access to food but it is really the wrong kind of food for their health and well-being, and it leads to overweight and obesity and diabetes and high blood pressure,” Schenk said. “And so it is not just feeding people. It’s feeding people the right food for their nutritional needs that is really something that we need to focus on.”

She said there is a stereotype among the middle class, of the hungry in our society, that is inaccurate and the reality frequently surprises the student volunteers.

“It’s not just the homeless person on the street or the person holding up the ‘will work for food’ sign at the end of the freeway ramp,” Schenk said. “It is their neighbors, their classmates. Hunger is not always obvious, and you do not know when someone might be struggling, and it could be the person you sit next to in class.”

Schenk said the concept of Lent reinforces the idea that some people do not have a choice to go without, and it is certainly a privilege to be able to choose to give up something for Lent.

Cameron Jones, 15, a dual resident of Trenton and Brownstown Township, has volunteered at Gleaners in the past. He said that during Lent it is important to remember people who do not have a choice about fasting.

“Hearing about all those kids who are starving is really rough,” Jones said. “I couldn’t image not having food.”

Austin Kraemer, 16, of Belleville, a first-time volunteer at Gleaners, said it is a great experience, and he wants to help any way he can, especially during Lent.

“I feel like we should give up the extras that we take in,” Kraemer said. “We don’t need all the fancy electronics, all these extra foods around the house. We can give to those who are less fortunate – they deserve it more.”

Katie Izzo, 16, of Wyandotte said working at Gleaners makes her feel good, because she feels she is directly helping other people. She said the extent of food insecurity locally surprised her.

“It was kind of eye-opening because I didn’t really realize so many people around me locally didn’t have food,” Izzo said. “It made me appreciate the food at my house more than I do. I say like something’s gross, but I am sure they would give anything for the food at my house.”

Allison Balan, 15, of Flat Rock, who has volunteered at Gleaners before, encouraged some of her classmates to join them this time. She said the statistics on food insecurity made her realize how privileged they are.

“It is nice to know that we are helping people, especially children our age who don’t have that much,” Balan said. “It is really a good feeling.”

Gabriel Richard teacher Erin Holmes said that during Lent students at the Catholic school focus on prayer, fasting and alms giving. She said the school is running a cereal drive to benefit Gleaners. The school also has a grace read over the public address system during Lent that focuses on hunger.

Jensen said she hopes the students will return to Gleaners after Lent to volunteer their time.

“I really think instead of giving up candy and things, which are good, that sometimes just making a positive commitment with their time is even better because you find out how rewarding it feels,” Jensen said. “Hopefully after Lent they will be instilled with that and want to come back.”