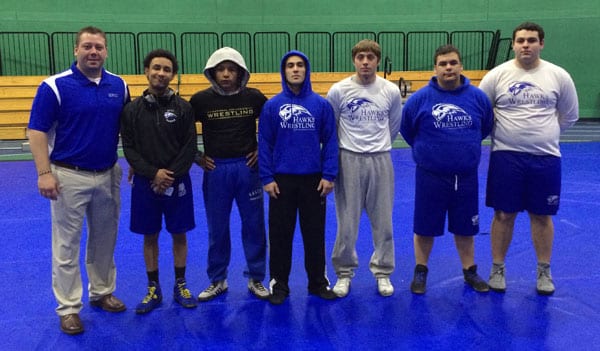 All six wrestlers on the HFCC team qualified for the NCWA National Championships, where they competed in Dallas in March. In addition, HFCC Coach Grant MacKenzie was recently named Great Lakes Region Coach of the Year.

“It’s just nice when hard works pays off,” MacKenzie said. “It’s amazing. I’m proud of my wrestlers. Many tried out at the beginning of the year, but only six remained and they were willing to pay to play.”

The grandson of Grant MacKenzie, namesake of the MacKenzie Fine Arts Building on the main campus, Coach MacKenzie, of Dearborn, has taught physical education at Allen Park Middle School for 16 years. A 1992 alumnus of Edsel Ford High School, MacKenzie attended Olivet College where he was a Division III wrestler.

He graduated from Olivet in 1996 with dual undergraduate degrees in Elementary Education and Physical Education. In 2003, he earned his Master of Public Administration from the University of Michigan-Dearborn. Additionally, MacKenzie is a graduate of the NWCA/Fellowship of Christian Athletes Academy.

“There will be some kids who may want to continue competing after high school, but do not have the grades nor the money for an NCAA school. The wrestling clubs at HFCC and U-M Dearborn have filled a void.

“I’m very honored to have been named Coach of the Year in the Great Lakes Conference. I received compliments from wrestling clubs in Ann Arbor and Bowling Green, Ohio. It’s been a wild year, but I’m looking forward to next year even more.”