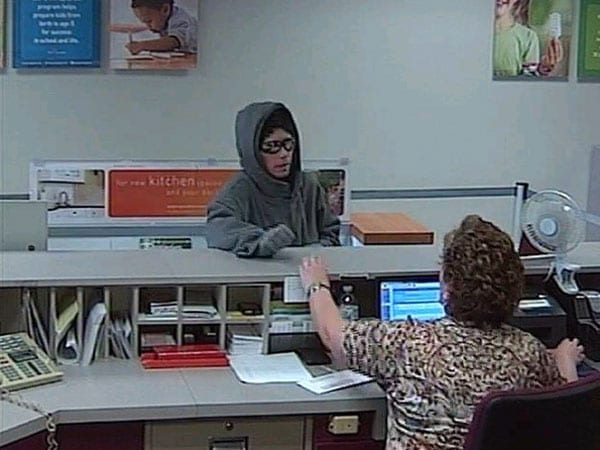 Photo courtesy of the Dearborn Police Department
A woman believed to be Cheryl Ann Farnsworth, 44, of Taylor, is seen at the counter of the PNC Bank, 23153 Michigan Ave., during a robbery that occurred April 14. Farnsworth was arrested in Woodhaven the next day and remains in federal custody for allegedly robbing PNC and seven other area banks between Jan. 29 and April 14.

By BOB OLIVER
Times-Herald Newspapers
DEARBORN — The 44-year-old Taylor woman suspected of robbing several area banks over the last few months was arraigned in federal court and remains in custody after being arrested in Woodhaven April 15.

A preliminary examination of the evidence against her is scheduled for 1 p.m. April 30.

Farnsworth also was denied bond by Grand, who said she presented a “risk to the community” and that she will be held in custody until her trial.

According to court documents, an anonymous tipster informed the Taylor Police Department that the suspect wanted for the robberies was Farnsworth and described the vehicle she owned.

The suspect vehicle was spotted by a Woodhaven police officer patrolling near in the intersection of West and Allen roads at 1:30 p.m. April 15. The officer initiated a traffic stop and took the woman into custody for driving with a suspended license.

At the Woodhaven Police Department, the woman attempted to pay cash to post her bond but the bills were identified as bait money taken from PNC bank the previous day.

Farnsworth was then taken into custody by the FBI and during interrogation admitted to robbing banks in Dearborn and Garden City.

When confronted with surveillance photos taken during other local robberies, Farnsworth identified herself in the photos.

According to a news release from the Dearborn Police Department about the last robbery, a woman entered the PNC Bank, approached a teller and handed her a note demanding money.

Though a weapon was not visible, the woman implied that there was a second person, a man, was outside the bank armed.

She was given an undisclosed amount of money and fled the bank in an unknown direction.

The woman was described as 25 to 35 years old, 5 feet 5 inches tall and 120 pounds. During the robbery she was wearing a gray hoodie, gray gloves, acid-washed blue jeans and white shoes.

Dearborn police said in the release they believed there was a connection between that crime and similar robberies that took place in Dearborn Heights and other surrounding communities, where a woman of a similar description entered the banks and demanded money, implying that a male suspect was armed and waiting outside the building.

Dearborn police have not been able to verify if there was a second suspect outside of the bank at the time of the robbery.