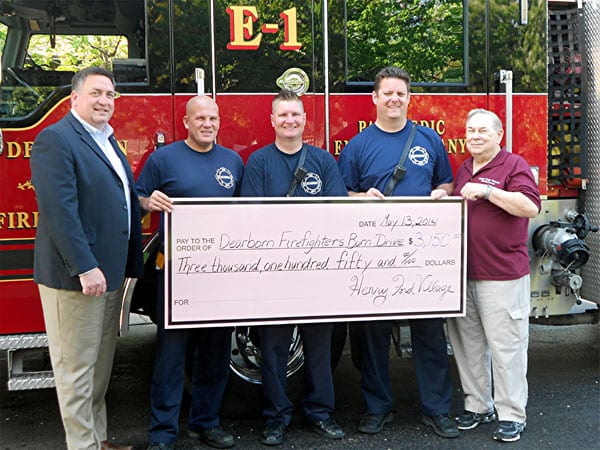 Martin and his fellow residents of the committee, organize an annual fundraiser for a local charity in addition to their many regularly scheduled events and concerts held for village residents. This year they sought to make a donation to the Dearborn Fire Rescue Squad to recognize their work.

“The purpose of life is to have a life with purpose,” Martin said. “That is giving back to the community and the citizens and there’s no better feeling than that.”

Upon finding out the Rescue Squad did not accept donations, the committee learned of the Burn Drive and decided it was a good way to honor the squad.

Through a concert held April 27 at Henry Ford Village featuring singer Linda Freeze, featuring the classic tunes of Cole Porter, George Gershwin and Irving Berlin, and also contributions from non-attendees, the committee was able to raise $3,150, more than double its goal.

“It’s so great to help a child and put a smile on their face,” said Worden, a 17-year firefighter.

For more than 40 years, the firefighters of the Dearborn Firefighters Local 412 and community volunteers have dedicated thousands of hours and hosted such fundraisers as the annual pumpkin sale and car raffle, and collected over $1 million for their cause.

“The more people that find out what we are and see the work we do the more money we will be able to raise and donate,” Worden said.

The Burn Drive’s reach has expanded over the years to include providing food, shelter and clothing to burn victims and their families, as well as assisting sick children and, in extenuating cases, even adults.

We just help so many people,” Worden said, “and we couldn’t do it without help from the community, like the group here at Henry Ford Village.”