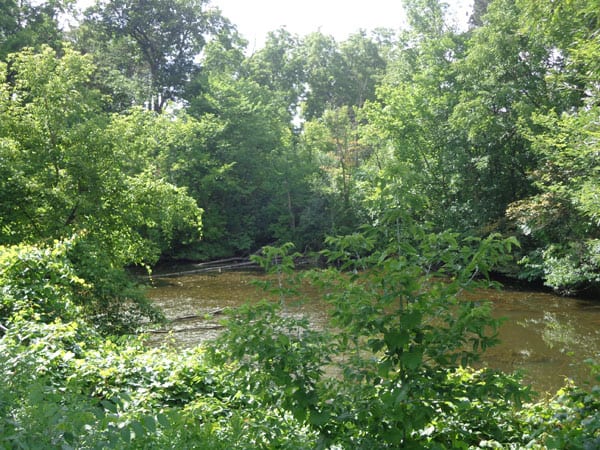 Photo by Bob Oliver
The Old Orchard Pond in the River Oaks Subdivision is being evaluated by engineers to determine what can be done to increase the current of water and amount of marine life to try to combat the ongoing mosquito problem that has caused many residents to complain to the city of potential health issues and ask for assistance. The city is also working to determine who owns the pond.

By BOB OLIVER
Times-Herald Newspapers
HEIGHTS – After over an hour of discussion, the city council authorized the mayor to prepare design plans and specification, acquire the necessary permits for construction and advertise for bids not to exceed $40,000 for the restoration of the Old Orchard Pond in the River Oaks Subdivision and authorized Corporation Counsel Gary Miotke to find out who owns the pond.

The decisions came at the July 8 council meeting.

Residents in the subdivision, which has over 200 houses and is located northwest of Ford Road and Evergreen, have been complaining to the city that the drainage of water from the pond into nearby creeks is blocked, causing standing water issues that have made the pond a breeding ground for mosquitos, which makes it difficult to leave their residences without being attacked and facing health issues due to bug bites.

Wade Trim Project Engineer Mark Pribak addressed the council stating that the pond is not completely blocked and that the issue is the depth of the pond rather than it’s current into neighboring waterways.

“In terms of restoration, what we’re left with is increasing the depth of the pond,” Pribak said. “You increase that and we can get other species living in the pond that will eat the insect nests.”

Pribak said that increasing the depth can either be done by dredging the pond to remove sediment from its bottom or by raising the water level.

“Our best solution would probably be a combination of the two,” Pribak said.

Pribak also recommended the removal of dead and fallen trees and stabilizing the banks with vegetation, rehabilitating the pond outlet structure to establish proper detention of storm water run-off, creating a forebay area in the pond to enhance future treatment for sediment removal and to reverse the ongoing degradation within the pond to control stormwater and improve water quality in the pond.

The total cost of the project is expected to be around $250,000 but city officials stated that they could not be sure of the total cost until after the area is professionally inspected and proposals are submitted.

After the initial costs and work, Pribak said that maintenance work would need to be performed every five to ten years depending on construction in the area. Residents argue that because it is a drainage issue, it is the city’s responsibility to fix it.

While all members of the city council have agreed that the bug problem needs to be resolved, the question of who should pay for it was raised by council members Joseph Kosinski and Marge Horvath, who stated that the pond is privately owned by the neighborhood association in River Oaks, not by the city.

Councilman Thomas Berry said that regardless of who owns the pond, the city has to protect its residents.

“They live in this community and pay taxes to the city,” Berry said. “We own the responsibility of making sure that their health and well-being are cared for.”

Miotke said that the ownership of the pond will have to be investigated because the city’s Assessor’s Office had the pond registered to the neighborhood association but also showed that it had gone into tax foreclosure in 2011.

He added that the investigation should only take a couple of weeks and that it would be alright for the city to have the pond checked and get recommendations for restoration without verifying ownership but that no repair work should be done without it.

Councilman Ned Apigian said that while he agreed that the study should be done at the pond to determine what should be done to repair it, his main concern was the immediate affect facing residents due to the bugs.

“No matter what we do or who pays for it, these people need some relief,” Apigian said.

Mayor Dan Paletko said that the city has been dropping mosquito killing pellets into the pond to cut down on the problem but was looking into new ways that would offer more relief while the restoration plans and engineer work begins. Many residents from the subdivision were in attendance at the council meeting to discuss the problem and what solutions are available, including River Oaks Community Association President Rick Marra.

“This is a major issue to us,” Marra said. “I live 6 blocks from the pond and it’s a disaster. We’re not asking you to rid us of this problem, we want you to reduce it.”

Tony Bumbaca, the treasurer of the association whose property borders the pond, said that residents want the issue to be resolved soon.

“This didn’t happen overnight, we’ve got years and years of accumulation that have caused this,” Bumbaca said. “I don’t know why we’re having so much trouble getting the council to approve the dredging of the pond.”

Bumbaca also invited any council members questioning the severity of the mosquito issue to visit the pond themselves.

“I can’t believe that any of them have been here if they don’t recognize how big of an issue this is,” Bumbaca said. “You can’t be outside for more than a minute without being eaten alive.”