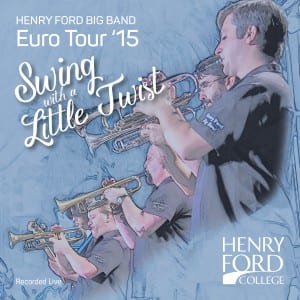 From July 6 to 16, the Big Band performed in its 12th European tour. In addition to the Arena Bindi, they traveled to Cannes-Mandelieu in France and the Umbria Jazz Festival, which is the largest and most famous jazz festival in Italy.

This was the first time the Big Band played in the Umbria Jazz Festival, where it was standing-room only.

CDs cost $10 each. To purchase a CD, contact Rick Goward, HFC founder and director of the HFC Big Band, at [email protected]

“This is a great holiday gift for swing music lovers,” Goward said. “The music on this CD was recorded from a live performance at the Arena Bindi on the boardwalk of Santa Margherita, Italy.

“We were the headliner music ensemble at the Arena Bindi, where a very large outdoor audience with overwhelming enthusiasm requested encore tunes at the end of the concert, including a rendition of the Italian national anthem,” he added.

HFC’s music program is home to the largest music performance ensembles of all two-year colleges in Michigan. For more than 30 years, HFC music ensembles have entertained and delighted audiences in more than 1,200 concerts, conferences, jazz festivals and performances worldwide.

The award-winning Big Band includes young professional musicians, music educators and traditional-aged music students – all of whom are enrolled at HFC to continue their performance opportunities.

The Big Band has shared the stage with jazz music greats including Canadian jazz trumpet player and bandleader Maynard Ferguson and the legendary Count Basie Orchestra.

“It’s always a pleasure to work with such exceptionally talented musicians,” Goward said. “Their hard work has paid off and this CD is proof positive of that.”