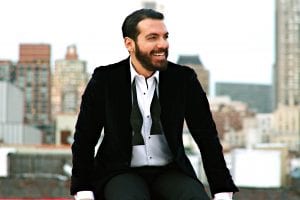 DEARBORN — The captivating musical entertainers are Lebanese. The stunning visual theme is Moroccan. The chic venue is American with a Detroit flair.

The goals: to celebrate the vibrant, diverse Arab American community and provide money for educational programs at the world’s only museum dedicated to the Arab American experience.

Pianist, international music producer and impresario Walid Al Massih and his frequent partner, award-winning vocalist Mia Haddad, will travel from Lebanon to perform for the gala audience, with a special guest appearance by renowned operatic and crossover tenor Amine J. Hachem, who is based in New York.

Haddad was brought up between Zgharta and Ehden, Lebanon, in a small family with deep appreciation for arts and music. She graduated with bachelor’s and master’s degrees from the Holy Spirit University of Kaslik and launched a career as a nutrition consultant, while harboring a hidden passion for singing.

In 2011, Haddad competed in a Lebanese singing championship and won the title, earning her the opportunity to represent Lebanon in Ireland and gain recognition internationally. Haddad’s mezzo soprano is well suited for pop and funk among other styles; she also covers French and English songs.

Haddad has earned recognition from the Rahbanis, best known for their work with iconic vocalist Fairuz. Her first single, “Shou yaaneh el-rahil,” is a tribute to her father who passed away unexpectedly. Written, composed and arranged by Ghadi Rahbani and filmed by Miled Tauk, it remains Haddad’s greatest achievement to date.

Al Massih is a Lebanese record producer, composer and musician. After building a strong reputation on the nightclub scene, he produced on Ragheb Alama’s 2009 album “Baasha’ak” and Maya Nehme’s 2009 single “War’a Bayda,” becoming a sought-after producer for Arabic pop artists. He also produced an official remix of the popular song “She Wolf” by international artist Shakira.
Al Massih later launched his own record label and production house, New Wave Productions, and became one of the most prominent producers in the region. His collaboration with famed Lebanese mastering engineer Tony Haddad helped Al Massih to expand his record label.
After further success in the nightlife scene, Al Massih’s home studio expanded to include three studios spread around Lebanon, with plans for more in the region. Al Massih manages and frequently performs and records with Mia Haddad.
Hachem is a Lebanese American operatic and crossover tenor who has captivated audiences across the United States, Europe and the Middle East. He has been a leading tenor in several operas and musicals, including “La Traviata,” “Tosca,” “La Bohème,” “Carmen,” “I Lombardi alla Prima Crociata,” “Madama Butterfly,” “Phantom of the Opera,” “Evita,” and “Joseph and the Amazing Technicolor Dreamcoat.”

In 2016, Hachem performed as part of New York Fashion Week and sang in a tribute for the famed opera star and Arab American Rosalind Elias, who proclaimed Hachem’s voice “magnificent.” Hachem trained as a classical pianist for a decade at the Lebanese National Higher Conservatory of Music.

His 2004 television appearance on the popular LBCI primetime program “This is the Song” solidified his musical presence in the Middle East. He later earned a vocal performance diploma from the Academy of Music and Theater in Munich, Germany.

Education is a cornerstone at AANM, with offerings ranging from academic to experiential that foster a better understanding and appreciation for Arab and Arab American history, culture and contributions. Students and educators comprise half the museum’s annual on-site audience while off-site programs touch thousands more.
Interactive educational programs, including guided tours, craft workshops, participatory dance demonstrations and traditional Arabic food engage thousands of children each year. Among the resources offered free of charge are lesson plans, professional development workshops for educators and print/electronic publications.
All AANM educational programs are linked with the Michigan Department of Education’s K-12 grade level content expectation standards in Social Studies, English and Language Arts and World Languages.