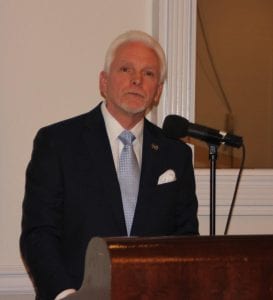 As he enters his 10th year as mayor, Kuspa said he is filled with gratitude and optimism for Southgate’s future.

“We have faced many challenges,” he said. “Southgate has laid the foundation for long-term stability and sustainable growth through the dedication and cooperation of our elected officials, employees, volunteers and residents. For that, I am most grateful.”

Kuspa called for continued focus on financial integrity, public safety, strong neighborhoods, a welcoming business environment, and a continual commitment to rebuild the city’s public spaces and infrastructure.
He said the city continues to increase its fund balance while it reduces its general debt obligation, which has decreased by 56 percent over the past nine years, and which he hopes will be eliminated by 2024.
Kuspa said public safety remains his highest priority, which allows a city to reach its full potential. In 2018 a 20-year-old fire truck was replaced, the police department is transitioning from cars to safer and more technologically equipped SUVs, and both the police and fire stations have received substantial building upgrades.
He commended Police Chief Brett Selby, who, by hosting public safety training, was able to obtain free or reduced cost tuition for the city’s public safety officials.

Kuspa said the Police Cadet Program, begun in 2017, encourages young adults to consider a career in law enforcement, and will produce it’s first success story in May, when former cadet and police academy student Jacob Bosley graduates and joins the Police Department. Once he completes his probationary period, the Southgate Police Department will be fully staffed for the first time in nearly a decade.

“Henry Ford Health Systems generously assisted our efforts by providing more than $90,000 in specialized life support monitors for our two EMS vehicles,” Kuspa said. “Rapid Response, our ambulance transport service, also committed to providing additional supplies for all of our fire response vehicles.”
He said the enhanced ALS service is now state certified and will be fully operational in February, with Fire Lt. Jeff Moore becoming the fire marshal EMS director, coordinating the ALS program, promoting fire prevention programs and assuming responsibility for more consistent fire safety inspections in commercial buildings.
“This is truly transformational,” Kuspa said. “It’s another excellent example of our commitment to promote and provide for the health and safety of our residents and visitors who require our EMS service.”
Kuspa said after public safety, reliable infrastructure is the city’s next highest priority.

He said the city has 65 miles of local roads and 16 miles of state and county roads, which include Fort Street, Northline and Eureka. With 88 miles of water mains running beneath the city, the task of managing and maintaining roads and pipes is a monumental task, and he praised the work of Hennessey Engineering and the Department of Public Services.
“I commend our city engineering firm, Hennessey Engineering, DPS Director Bob Tarabula and all of the members of our Department of Public Services for their ongoing commitment to address the demands of our aging infrastructures in a realistic and cost-effective way,” Kuspa said.

He said the lining of water mains helps increase the longevity and help maintain the integrity of the water supply.

Kuspa said just as public safety, reliable roads and safe water is essential to a city’s health, so are parks and recreation programs to the vitality and well-being of residents.
He praised the leadership of Director Julie Goddard, and said her research and cost effectiveness improves parks and “promotes playability.”
Kuspa said the five-year millage passed in November 2017 regraded and modernized Rotary Park, with two new playscapes, a concrete pathway, improved drainage, an upgraded basketball court and three new covered seating areas.

He said the ice arena received a new Zamboni, its first in 25 years, which has already had a positive impact on ice time usage and arena revenue growth.

Kuspa said that this coming year, $1 million will be spent in Kiwanis Park, known for its miniature trains. He said the park will receive a new south pavilion, a lighted walking path, a new train-themed playscape and a paved parking area.

He said Market Center Park hosted many events in the past year, including Market in the Park, summer concerts, the city’s 60th anniversary Heritage Days last June, and private and ticketed events.
Kuspa said just as focus on the basics provides a better life for residents, the same attributes make the city more attractive to businesses.

He praised new DDA Director Stephanie McNees for positive changes in the city’s commercial corridors and in the Downtown Development Authority District.

“For the first time in our history, we have a full time staff member dedicated to assisting and promoting our business community,” Kuspa said. “Stephanie is doing a phenomenal job in that position.”

Kuspa said business entrepreneurs and corporate partners foster strong relationships and alliances, which meet the needs of residents and the commercial district.

He said Fort Street has resurged as a commercial corridor in the wake of the new Kroger development.
“A total of 43 businesses either moved here or made substantial investments to their existing facilities during the past calendar year,” Kuspa said. “This has really been great news for our city and builds on the successes we have had in the past few years.”
Kuspa said upcoming projects include: a 170-unit single story residential community, Redwood Living on Allen Road; the redevelopment of the former Kroger store on Eureka into a Cube Smart; new headquarters for Downriver Federal Credit Union on Trenton Road; and Staybridge Suites on Reeck Road.

“These 2019 commercial developments represent more than $40 million in new investment in our city, and it’s only January,” Kuspa said.

Kuspa praised the cooperation of his administrative team, city employees, elected officials and the residents who have built on the community’s success.
“Together our efforts remain focused on that task,” he said. “We can take pride in our efforts because we know that together we will ensure that Southgate remains the premier community in which to live, work and raise a family.”