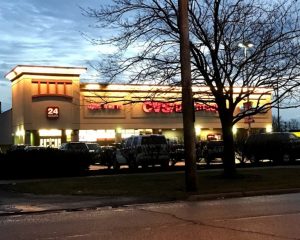 WYANDOTTE — A shoplifter fled CVS, 2025 Fort St., the morning of March 18 after a store employee confronted her about the packages of makeup concealed in her purse.

An employee later found two empty earring packages near where the suspect had been loitering.

The suspect was described as a white woman in her early 20s, with blonde hair, gray pants, and a black coat and shoes.