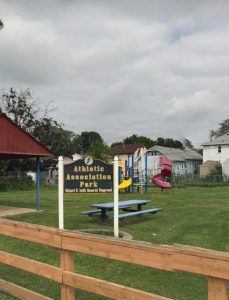 WYANDOTTE — A 32-year-old man from a neighborhood group home was arrested for public intoxication March 24 after a police officer discovered him drinking in the Wyandotte Athletic Association Park, near Alfred and Highland streets.

The man, who had multiple past violations of a similar nature, was arrested and taken to the Wyandotte police station, where he was held after a preliminary breath test indicated a blood-alcohol content of 0.19, more than twice the 0.08 limit for legally drunk in Michigan.