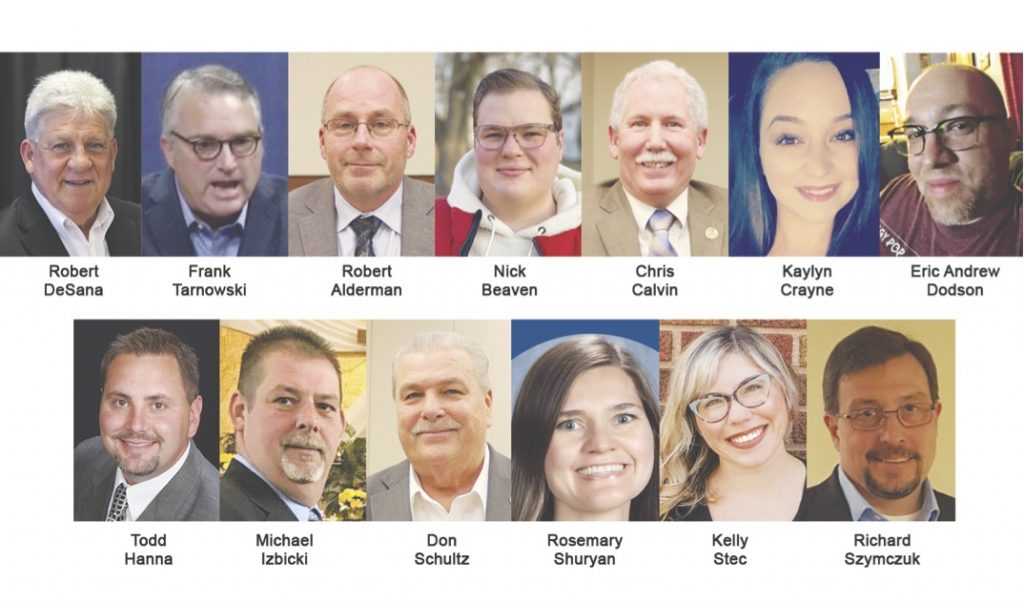 WYANDOTTE –The city will elect a new mayor May 4, when residents vote to choose a new leader and city council.

Robert A. DeSana, who chose to serve as mayor pro tem since the late Mayor Joseph Peterson’s death May 17, to keep the composition of the city council intact, is running for mayor against challenger Frank A. Tarnowski.

Eleven contenders are running for the six city council seats. Incumbents Leonard Sabuda and Megan Maiani are not seeking re-election.

Alderman, Schultz (who is currently hospitalized) and Dodson did not respond to requests for information by press time.

He also served on the city’s charter revision committee and recreation commission.

“I have the dedication and the experience to work for the residents of the city to make our community a desirable place to live and work,” DeSana said.

He said a major issue facing the city is the management of its financial resources, to provide the best level of service and redevelopment for residents.

“The mayor needs to be the prudent financial manager of the resources of the city,” DeSana said. “We need to improve the neighborhoods and the central business district, as it is the only downtown that is a vibrant business community within the Downriver area.”

He said code enforcement will continue to be one of his top priorities, and will ensure that property maintenance issues are dealt with in a timely manner.

Tarnowski said he is running to bring leadership to the city’s top spot.

“We need leadership from this position,” he said. “We need our mayor to be on top of the simple things: alleys, code violations, being in communication with every department and giving every business and citizen a voice in our city.”

Tarnowski said the McKinley School project is among his top priorities, and said the next mayor and council need to come up with a plan with which both city officials and neighborhood residents agree.

“It’s an eyesore to the neighborhood,” he said. “We are losing tax dollars because our current and past councils failed us.”

Tarnowski said another eyesore is the old city hall, which has been sitting around for years with no progress.

“We need to see if any plans are in the works and move on them,” he said. “Tax revenue is being lost.”

Tarnowski said the Labadie Park housing development, which has empty lots, is another concern, and another source of potential tax revenue.

“We need to get this project going again,” he said. “A total of 18 possible houses could be built here, and with the housing boom going on right now, this would be perfect for people wanting to live in Wyandotte.”

Beaven said he is running for city council to help carry the community into the future and to continue to improve the city’s quality of life.

“Growing up, I learned quickly that serving others was our duty,” he said. “Our existence is meant to serve a purpose greater than ourselves.”

Beaven said making a positive impact on the lives of others, which inspires him daily in his elementary school classroom, inspired his to run for the city council.

He said his top priority and the biggest issue facing Wyandotte is the lack of transparent and accessible communication between residents, the business community and local government.

“This ranges from our hard-to-navigate website, to accurate and consistent enforcement of building codes and ordinances,” Beaven said. “As a city, we need to embrace technology and how it can help to make our communication more efficient internally and to our greater community.”

He said he would like to collaborate with the city’s IT department to development solutions for the existing website and to development a mobile app residents and business owners can download to access information. He also wants to get information to residents who don’t use technology as frequently by including information with their city utility bills.

Calvin said he feels he is the best suited for the city council at this time because of his past experience.

He said he was on the Michigan executive board for the American Federation of State, County and Municipal Employees, AFSCME, representing 88,000 members, and he served on the Wyandotte school board.

Calvin said he retired after working for the city of Wyandotte for many years, and has experience as a volunteer as well.

“I know a lot of the interconnections of our government in Wyandotte, and the people of Wyandotte,” he said.

Calvin said the number one issue is the city’s budget, which he said the city council struggles with “all the time.”

“We need to make sure that we are selling off lots, building properties, and getting tax revenue in, to have the most revenue we can, so we can have the best budget,” he said.

Crayne said she has a strong background in charity work and with community events, and has spent her career working in development.

“I was born and raised in this city, and have a deep love for its history,” she said. “I believe we need council members that are involved, and I can proudly say I am an active member of this community, from development, to the schools and youth sports.

“I am your neighbor, and I am here to help make the place we all love to live, work and play the absolute best it can be.”

Crayne said her priority is to “bridge the gap between the chambers and the neighborhoods.”

“There needs to be better communication on several levels,” she said. “I hope to listen and learn what the citizens, municipal employees, first responders and business owners would like to see, to make us more successful.”

Crayne said tightening ordinances, and better property management, needs to be addressed, and the city’s alleyways need to be inspected and cleaned up.

“I want to work closely with the business owners to help them flourish here, and to get our empty storefronts filled and open for business,” she said. “Many items are important to me, and getting to work with the people that work and live here is how I plan to accomplish the goals of the city and its residents.”

Hanna’s experience and knowledge as a small business owner motivated his run for council.

“I was born in Wyandotte and have lived here most of my life,” he said. “I love our community, and want to serve this city.”

Hanna said small businesses in the city have been hit hard by the pandemic, and need the city’s support to survive.

“We need to learn to live with COVID, and keep our businesses open safely,” he said. “These businesses provide jobs in our community, and we count on the tax revenue from all of these small businesses, which support our local schools and sports teams.”

Hanna said city departments, including police, fire and its educators, have done an amazing job during the pandemic.

“I applaud these departments and our current leadership for managing our city during this crisis,” he said. “I plan to help continue the fight, and keep our city a great place to live.”

Izbicki said the obligation to focus on the needs of the neighborhoods and residents is overdue.

“Being a resident of Wyandotte for 57 years, and compassionate to the needs of our city and its residents, I am a ‘get things done’ individual,” he said. “I am confident that I can represent our citizens in a positive manner, and I look forward to the opportunity to build a better and stronger relationship between local government and its people.”

Izbicki said the McKinley School neighborhood project is an important issue that has been going on for too long.

“It is my hope that a resolution can be agreed upon that fits both the needs and wishes of the citizens and the contractor,” he said.

Shuryan said the city of Wyandotte has given her so much, she would like to help make the community even better.

“I want to support small businesses and economic development, so that Wyandotte continues to grow as a place for people of all ages to spend their time,” she said. “I also want to support the environment and veterans.”

Shuryan said working as a teacher has honed her ability to work as part of a team, and her volunteer work has taught her to work with others, even those with different views, to achieve goals.

She has coached Special Olympians, fostered animals for Shelter to Home, volunteered through the Wyandotte Rotary Club and is leading the Green School Committee at the school at which she teaches.

Shuryan said the McKinley School project, and the developer’s plan to move the park, is an immediate concern to her.

“If elected, my first goal would be to get the council, developer and residents into communication with each other about their goals,” she said.

Shuryan said blight and ordinance enforcement are also among her priorities.

“Wyandotte is full of history, and with that comes older homes,” she said. “I want to partner with volunteers, and research grants and other funding sources to help our low-income residents fix their homes.

“However, it would be incorrect to say only low-income residents are responsible for blight. We need to focus some attention on landlords and property owners to ensure they keep properties up to code.”

Stec said representing residents requires those elected to be open, empathetic and ready to set personal feelings aside for the greater good of the community.

“It is built on the ability of leaders to set egos aside, trust each other and work together,” she said. “Having spent the majority of my professional life in public service, from Greenbox counselor to legislative director, I know what it takes to be a good public servant, and I am ready to bring my empathy and experience to residents of the city, to make Wyandotte the best city it can be.”

Stec said she wants to ensure that Wyandotte is a place where people want to build their lives.

“We have seen a steady population decline over the last three decades, which has decreased revenue sharing, and increased vacancies and blight,” she said. “If we want Wyandotte to thrive, we have to do more to encourage people to make it home.”

Shuryan said that creating a Youth Commission, tasked with providing specific programming and policy recommendations, would reflect the needs and wants of the younger generation, and encourage them to build their lives in the city.

Szymczuk, who has served on the Wyandotte Zoning Board of Appeals for the past seven years, said it taught him to make decisions that impact both property owners and other properties in the area.

He said as a business owner, he has learned to build teams, unify resources, work collaboratively with others and make the hard decisions that affect both employees and customers.

“I have served on many boards, for different organizations,” Szymczuk said. “You must respect the positions, concerns and ideas of others.”

He said as a councilman, he would be accessible, approachable, accountable and transparent.

Szymczuk said his priority is helping residents and businesses survive the pandemic, and come out of it stronger and healthier.

“Extending the parameters of the Downtown Development Authority to encompass the city of Wyandotte as a whole, and not just the downtown area, will get businesses coming into Wyandotte, encouraging revenue dollars in the city.”