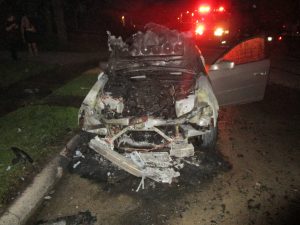 WYANDOTTE — A Wyandotte woman’s 2003 Cadillac was doused with accelerant and set ablaze at 5:10 a.m. May 22 in the 800 block of Lindbergh Street, with the lead suspect being a woman with whom she had a physical altercation in Detroit several hours earlier.

Deputy Police Chief Archie Hamilton said that while the arsonist has temporarily escaped arrest, Wyandotte police have gathered “an insurmountable amount of evidence” which he said will undoubtedly lead to her prosecution for the crime.