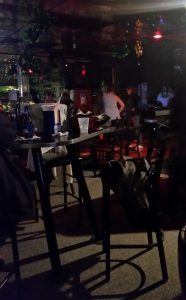 WYANDOTTE — A 45-year-old Wyandotte man was charged with assault and resisting arrest the evening of May 25 after he assaulted another customer at a bar in the 3300 block of Fort Street.

When police officers arrived, the man’s unruly behavior had escalated, and he was heard screaming insults at bar employees.

The man made matters worse by taking a fighting stance in an attempt to challenge a police officer. Even after he was handcuffed, the man pulled away, and spit repeatedly on the police officer.