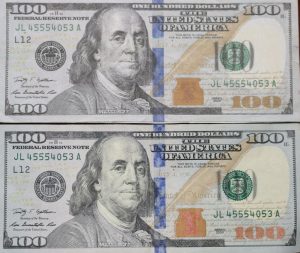 TAYLOR — A would-be shoplifter at Kohl’s, 14500 Racho Road, attempted to pay for his purchase with counterfeit cash on Oct. 2 after being stopped at the door by a loss prevention employee.

The man attempted to pay for his cartful of merchandise using four counterfeit $100 bills, but the money did not have any of the verification security features.

The man then fled the store, sans merchandise, and drove off in a black sport utility vehicle.

His image was captured on store surveillance footage. Per procedure, the U.S. Secret Service was notified of the attempt to pass counterfeit cash.