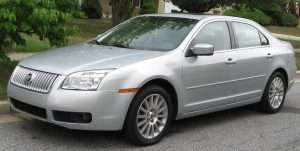 LINCOLN PARK — A tan 2007 Mercury Milan was reported vandalized Feb. 23, with the catalytic converter, valued at $400, sawed off and stolen from the undercarriage of the car.

The victim, a 69-year-old Lincoln Park man, said the theft occurred overnight while the vehicle was parked in his driveway. There were no suspects.