DEARBORN – As flyovers soared overhead and marching bands trilled, Dearborn returned to its annual Memorial Day Parade for its 96th year, after a two-year hiatus during the peak of the COVID-19 pandemic.

A solemn horse-drawn wagon carried a flag-draped casket with the cremains of a serviceman killed in action, followed by a single riderless horse.

First responders, the heroes of the pandemic, were greeted enthusiastically as lights flashed and sirens whirred.

In all four divisions of the parade, bands set toes tapping, with the city’s high schools and middle schools well represented, and the Navy Band Great Lakes performing.

Politicians, from the city to the national level, were well represented, from Mayor Abdullah Hammoud and his wife and baby daughter, to the city council, school board trustees, Wayne County commissioners, and state and national representatives.

The newer the politician, the more enthusiastic they seemingly remained throughout the long, hot trek.

Veteran groups, from the Downriver Vietnam Veterans of America Chapter 259, to the Veterans of Foreign Wars District 4 riders, demonstrated strength in numbers.

The Redford Union Unicycle Club awed onlookers with their balance, while Scouts and the American Rosie the Riveter Association showed their support along the route.

The Dearborn Historical Museum turned back time, covering the parade route in two vintage autos, while more modern vehicles, including the Stellantis Raminator, impressed with its sheer size.

Special Olympians enthusiastically participated, as did the Dearborn Kiwanis and the Sons of Union Veterans of the Civil War.

The route ran west on Michigan Avenue, from Schaefer to Henry Ford Centennial Library, offering numerous comfortable spots for residents to watch the parade pass by.

The parade passed the reviewing stand north of the library, and many onlookers went on to the library following the parade, where the Memorial Day Service followed at noon. 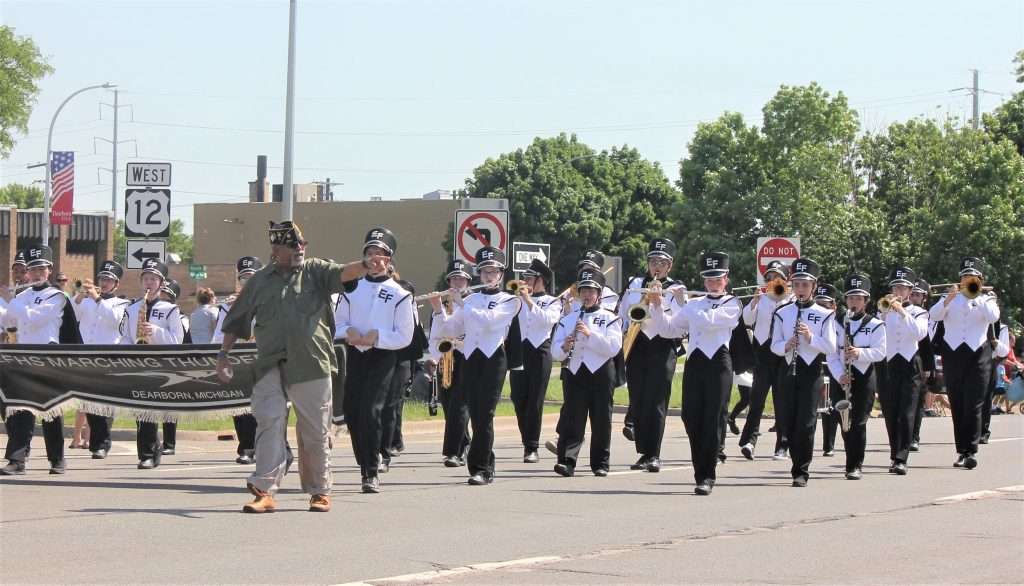