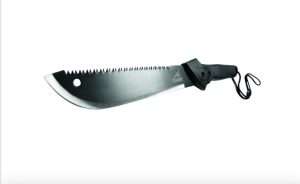 DEARBORN — Speeding and possession of a machete resulted in a 30-year-old Detroit man’s citation the night of June 2 for reckless driving and a knife ordinance violation.

The man was seen racing his silver Toyota sedan 60 to 70 mph against a white pickup truck on southbound Wyoming Avenue near Eagle Street, in a 35-mph construction zone. The witnessing police officer was forced to brake and swerve to the side of the road to avoid being struck.

The driver of the Toyota had a plate belonging to another vehicle, and no vehicle insurance. During a search of the vehicle, a large machete was discovered under the seat, which the driver said he carried for his own personal protection.

The vehicle was impounded and towed, the machete was taken as evidence, and the man was given a courtesy ride to McGraw Avenue and Ford Road in Detroit.