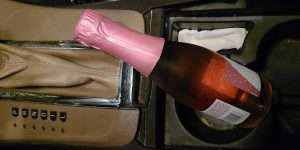 MELVINDALE — A man in drag with a partially consumed bottle of wine in the front seat vehicle cupholder was cited the morning of June 6 for driving while his license was suspended and revoked, for having an open alcoholic intoxicant in a vehicle and for obstructing justice.

The man, for whom a traffic stop was initiated for not having a visible license plate, had a half-consumed bottle of wine in his cup holder. He was dressed as a woman, and initially provided a false name to the police officer, before providing his actual Michigan identification card.

When the officer ran his identification through the Law Enforcement Information Network, he was found to have three prior convictions for driving while his license was suspended, and he had multiple traffic warrants from several different jurisdictions.

His vehicle, a 2005 Chevy Avalanche, was impounded and towed, and he was advised to contact the 24th District Court in Allen Park for an appearance date.