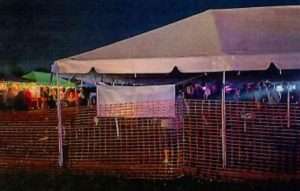 RIVERVIEW — A drunken 35-year-old Riverview man who tried to steal a beer tent sign the night of June 18 during Summerfest, while a police officer watched the ill-fated actions unfold, was arrested for larceny and being a disorderly person.

The American Legion beer tent, which is adjacent to the Police Command trailer, provided an unobstructed view of the man untying the cords of a 6-foot by 30-inch Bud Light banner, rolling it up and walking away with it.

The police officer then approached the man and directed him to return the sign. However, the drunken man became angry, and started to scream obscenities. His brother tried to calm him down and take him home, but the man was angry and escalated his behavior, even when his daughter clung to his leg, crying and begging him to stop.

The police officer asked him to calm down and leave so that he didn’t have to arrest him in front of his daughter. However, the man continued to drop f-bombs.

Additional police officers arrived, and they took the man into custody. He was taken to the police station, booked and released on personal bond without being held.