Local thespians have produced double delights on local stages, with the Detroit Mercy Theatre Company garnering national honors in May from the Kennedy Center American Theatre Festival’s National Competition, for its fall 2021 production of “Antigone,” and the Ringwald Theatre premiering its original romantic comedy musical parody “You’ve Got Male.”

In January, the show was one of six regional productions chosen to perform at the 2022 Kennedy Center American College Theatre Region 3 Festival, a regional honor.

The production was the first U of D Mercy show since 1978 that has made it to the national level. The department congratulates its students and staff for their work and performances. 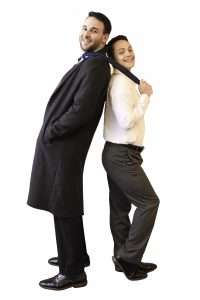 The debut of the original romantic comedy musical parody “You’ve Got Male” takes to the Ringwald stage July 8 through Aug. 8 at Affirmations, 290 W. Nine Mile Road in Ferndale.

Written by local playwrights Vince Kelley and Matthew Arrington, the show is a jukebox musical mash-up.

Arrington said it is an honor to be part of producing a big, raucous, campy summer parody for the Ringwald.

“We hope everyone enjoys watching our love letter to romantic comedies as much as we enjoyed writing it,” he said.

The story centers on successful wedding planner Julian Roberts and team member Ryan, who can’t stand each other in person, but who unknowingly connect online, launching a romance on Grindr, a social networking app for the LGBTQ community.

When Ryan learns his online romance is with his tightly wound boss, he must rethink what he thought he knew about him.

The cast weaves romantic comedy icons into the show as it offers songs about love and loss, and hopefully finds its way to a happy ending.

Directed by Brandy Joe Plambeck, Arrington assistant directs, with Lily Czartorski as the music director, Jair Alexander as the choreographer, Kelley as the costume designer and Plambeck as the lighting and sound designer.

Tickets are available online at the Ringwald.com. The theater is now cashless, but credit cards will be accepted at the door.

Masks and proof of vaccination are required for entry.